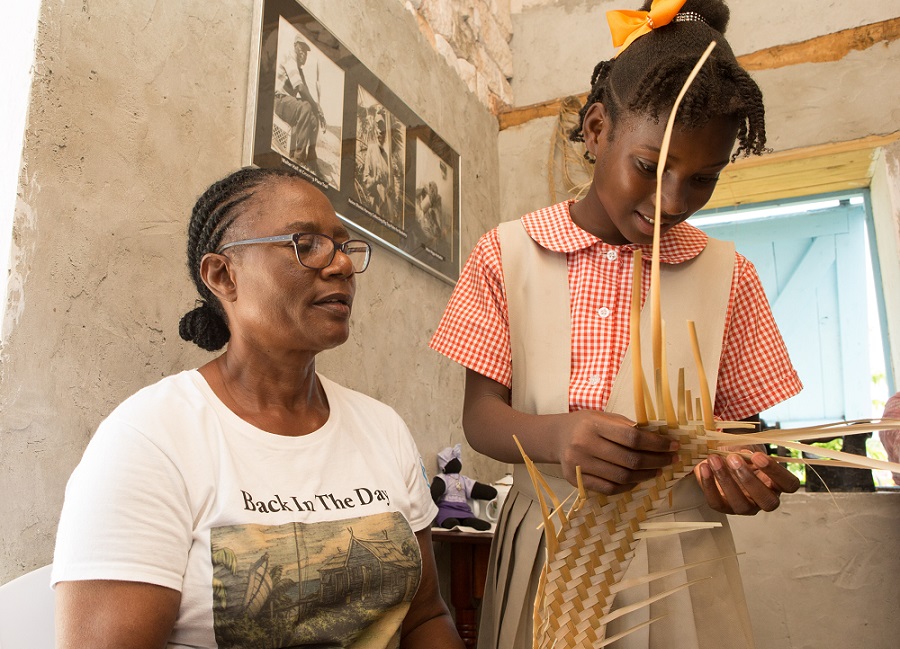 #Providenciales, June 26, 2019 – Turks and Caicos – The third annual Museum Day Event, ‘Back in the Day’, was successfully held by the Turks and Caicos National Museum, Grace Bay, Providenciales on Friday, June 21 2019. The inclement weather that resulted in the postponement of the event from its originally scheduled date of May 18, International Museum Day was certainly not an issue this time around, as it was a beautiful sunny day. However, attendees welcomed the shade provided by the many tents in the garden.

Attendees stepped into the Caicos Heritage Homestead and were transported to the last century where they had the opportunity to learn, participate and observe many aspects of the traditional lifestyle typical to the early mid-1900s. Once some of our younger visitors understood workings of the hand crank ice cream maker, they enthusiastically helped Ms. Malcolm to turn it, while anxiously awaiting the promised ice cream. I have the fond memory of hearing a young student proudly say to her peers, ‘This is the ice-cream that I made’ satisfied with the outcome of her first time experience. The women of the Leeward Methodist Church Women’s Fellowship served up some delightfully delicious traditional treats.

Ms. Daphne Forbes, Mrs. Jane (Oleta) Missick and Mrs. Alveria Duncombe shared their stories they weaved baskets, made scrap mats and made grits. Many watched with interest as Ms. June Hawkins washed clothes using wash tubs, basins and scrubbing boards while others remembered those tedious tasks not very fondly I might add. Mrs. Bathel Handfield took us back to the days of roasted corn and sweet potatoes, which was a real treat. No detail was lost on the audience as Ms. Brenda Clare vividly described various aspects of life ‘Back in the Day’ and interjected colourful anecdotes. Mr. Bill Clare also shared stories from yesterday and Mrs. Cheryl Foreman who also co –hosted the event, helped to put everything in context.

The Caicos Sloop that Pastor Goldston Williams began building at the first ‘Back in the Day’ event was completed in time to be donated to the museum in time for this year’s event. Pastor Goldston, also demonstrated the weaving of fishing nets as he spoke of the importance of the Caicos Sloop in the cultural heritage of the islands.

Traditional games were a big hit especially the spinning of tops that were hand made by Pastor Gold. Mr. Dwight Myrie, Pastor Gold and Ms. Almartha Thomas were on hand to ably demonstrate, teach, reminisce and even compete with top spinning and other games. It was loads of fun and it shows that the pastimes of yesterday are still able to entertain today.

Enid Capron Primary School ripsaw band delighted the audience and got support and tips from the maestro Lindsay Butterfield (Zeus).  Zeus, Alfred Robinson and Vaughn Hinds gave a fantastic performance and were able to give quick lessons and gain additional band members from the audience, young, young at heart, visitors and residents all got an instrument and joined in the fun. We even got a chance to see Dr. Jameiko Harvey’s skill with the saw. Mr. Arthur Dean’s performance included a repertoire that took us through time. Wrapping up the entertainment was the young Jahvian Braithwaite singing oldies as if he lived in that era and TCI poet Rachael Harvey reminding us of the importance of embracing our cultural heritage.