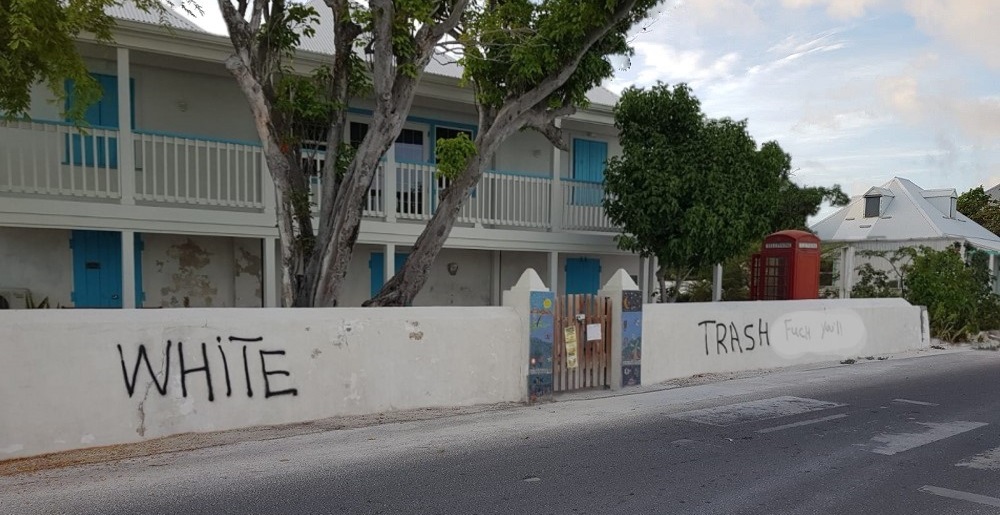 Grand Turk, June 27, 2019 – Turks and Caicos – On June 26th it was discovered that the Museum on Grand Turk was a victim of vandalism with hate speech.  This has recently been a problem on Grand Turk with several signs and other buildings on the island being targeted.  While we don’t believe that the Museum itself was the target, as the 7th Day Adventist Church on Front Street, which is primarily used by Haitian worshipers was also targeted.

After police inspection we removed the graffiti from in front of the Museum and assisted with the removal from the Church. However, there is a miss-perception that the National Museum is for expats and whites only.

The Turks and Caicos National Museum Foundation (TCNMF) is dedicated to recording, interpreting, preserving and celebrating the rich history and culture of the Turks and Caicos Islands and ALL its people.  Over the last several years we have expanded our community outreach and educational programs to include events including the monthly and summer kids club (both Grand Turk and Provo), Back in the Day (Provo), Grand Turk Cooking Competition, Emancipation Day Celebrations (Provo), Museum Day (Grand Turk), Museum Quiz (Provo), Evening with the Experts (both Grand Turk and Provo) and Movie Nights (Grand Turk).  We will continue to use the Museum as a location to celebrate the community.

Additionally, the Museum has a diverse board of directors including Belongers and ex-patriots, all of who volunteer their services.  At the recent Museum Gala in Provo on June 8th the museum honored Board members, Hon. Derek Taylor, and Mr. Thomas Saunders, former director of Immigration for their incredible 27 years of volunteering on the board of Directors, since the museums inception.

We will not let the recent hate speech deter the museum from continuing to expand our programming and events for all the residents of the Turks and Caicos.

TCNMF is a registered not for profit organization.