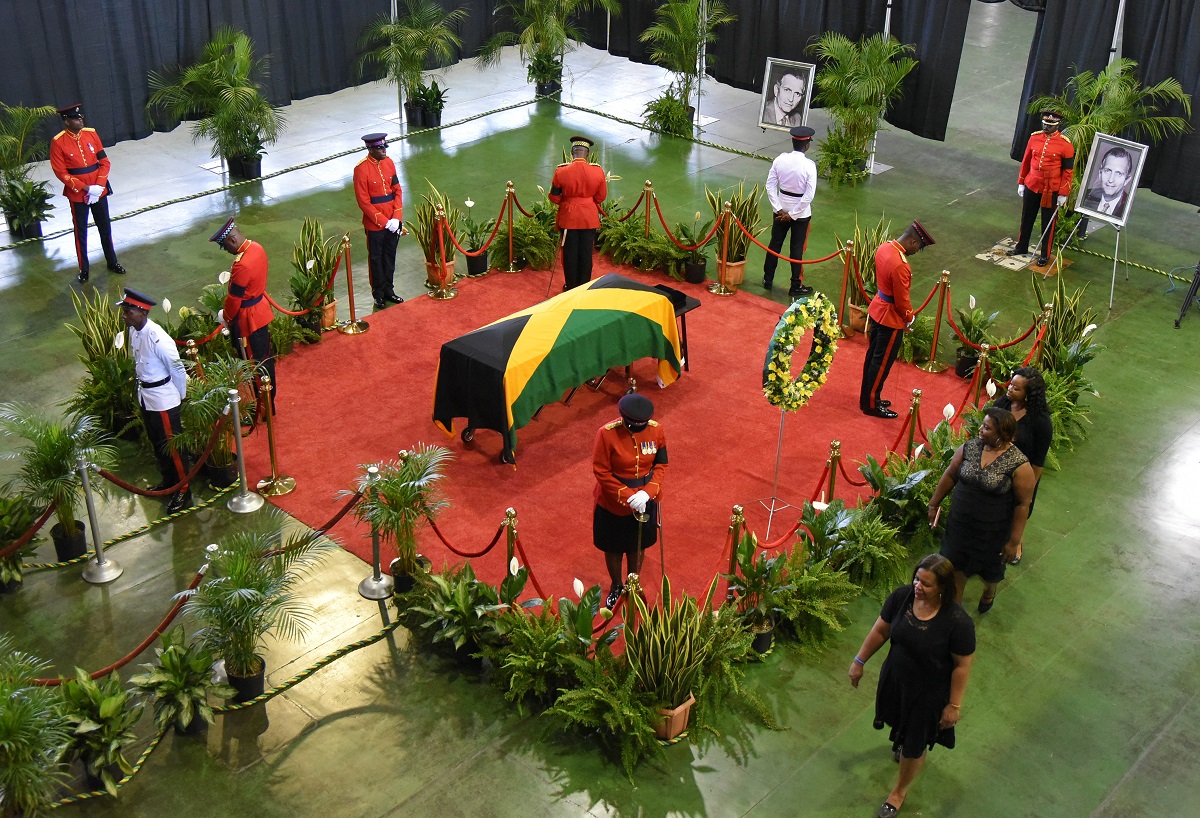 #Kingston, June 21, 2019 – Jamaica – Numerous persons took time out on Thursday (June 20) to pay respects to the late former Prime Minister, the Most Hon. Edward Seaga, on the final day of his lying-in-state at the National Arena, before his burial on Sunday.

Among them were Mr. Seaga’s niece, Rebecca Tortello and her children, Maria and Rhys Greenland.

Some of the mourners told JIS News that it would have been remiss if they did not pay their last respects and sign the condolence book on the last day members of the public are allowed to file past the casket.

Angellique Virtue said Mr. Seaga was an outstanding leader whom she grew to respect, based on the positive returns she has seen from investments he made on behalf of Jamaica.

“I grew up in a time after Prime Minister Seaga served, but the stories I’ve heard of him and the legacy that I see today, as a young person, compelled me to come by and to pay my respects,” Ms. Virtue said.  She added that she respects the educational initiatives he ensured were put in place, such as the HEART Trust/NTA in 1982.

Another mourner, Chadd-Rick Clarke, described Mr. Seaga as a legend.

“I came to pay my respects to someone who has contributed significantly to nation-building that has caused us to live in independent Jamaica. I am honoured to be living in his legacy… . Some of our roots, some of our culture, were initiated by him and I am overwhelmed by the different contributions he has made over his tenure serving this country,” Mr. Clarke said.

Meanwhile, Gillian Rowlands remembered Mr. Seaga as a visionary for Jamaica and for his help in creating a pathway for Jamaicans studying abroad to return in the 1980s.

Mr. Seaga served as Member of Parliament for West Kingston for 43 years, and Prime Minister from 1980 to 1989.

The nation is observing a period of mourning in honour of the life and service of Mr. Seaga from June 19 to 22. No public social functions or official events should be held during the four-day period.

Both Houses of Parliament offered tributes in a special sitting on June 19, and a wake will be held at Tivoli Gardens Square on June 22.

The State funeral for Mr. Seaga will be held on Sunday, June 23, beginning at noon, at the Cathedral of the Most Holy Trinity, 1 George Headley Drive in Kingston. Interment will follow in National Heroes Park.

Header:  Persons file past the casket of the late former Prime Minister, the Most Hon. Edward Seaga, during the lying-in-state at the National Arena on Thursday (June 20).

First Insert: Ms. Rebecca Tortello (second right), niece of the late former Prime Minister, the Most Hon. Edward Seaga, being consoled by her daughter, Maria Greenland (second left), at his lying-in-state at the National Arena on June 20. Others (from left) are Rhys Greenland and Kari Leftwich-Wolfe.

Second Insert: Mourner, Gillian Rowlands (right), pays her respects during the lying-in-state for the  former Prime Minister, the Most Hon. Edward Seaga, on Thursday (June 20) at the National Arena.

Third Insert: Mourner, Chadd-Rick Clarke (right), pays his last respects during the lying-in-state for former Prime Minister, the Most Hon. Edward Seaga, on Thursday (June 20) at the National Arena.