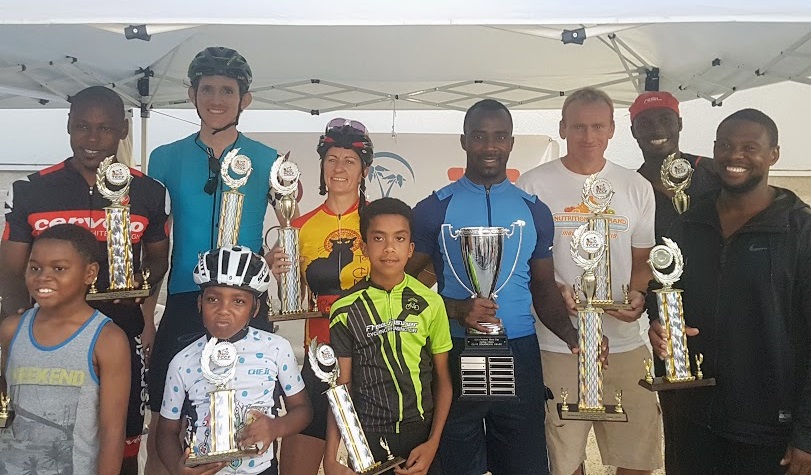 Though the rains delayed the start of the races, the weather did not discourage the cyclists who showed up in record numbers. This race is always one of the most anticipated races of the year for the Federation, mainly because of the bragging rights for cyclist to have their name on the prestigious Clive Stanbrook floating Trophy. All eyes were on defending champion Tyrone Bishop, who won in 2018.

The Winner of the Cadets (kids) race was Ethan Gardiner one of our most promising young cyclist, he was followed in second by new comer Renardo Palmer and Kymani Ewing who held his own against the older boys, in third.

The 41-mile female category was won by Gabriella Hedegus. Though she was the lone cyclist in her category, she made it her mission to surpass her personal performance in last year’s race.

The Masters and Elite categories both rode a distance of 51-miles. Masters was topped by Shanwell Gardiner followed by Dan Redmond and Fred Registre. Elite was bested by Tyrone Bishop, with Anthony Plunkett in second and Reno Palmer in third.

The honour of being named the IGA National Heroes Day Classics champion and being awarded the Clive Stanbrook Memorial Floating trophy was bestowed on the first rider from the Masters or Elite category to cross the finish line. Tyrone Bishop, the first recipient of this prestigious honour, was unable to hold on to the title for a second year. He was bested in the final sprint by Shanwell Gardiner

The Turks and Caicos Cycling Federation wishes to thank our sponsor: IGA, the public who came out to support the event, the Royal Turks and Caicos Police Force who kept us safe during the event. A special thank you also to the race committee and volunteers who assisted in making this event a success.