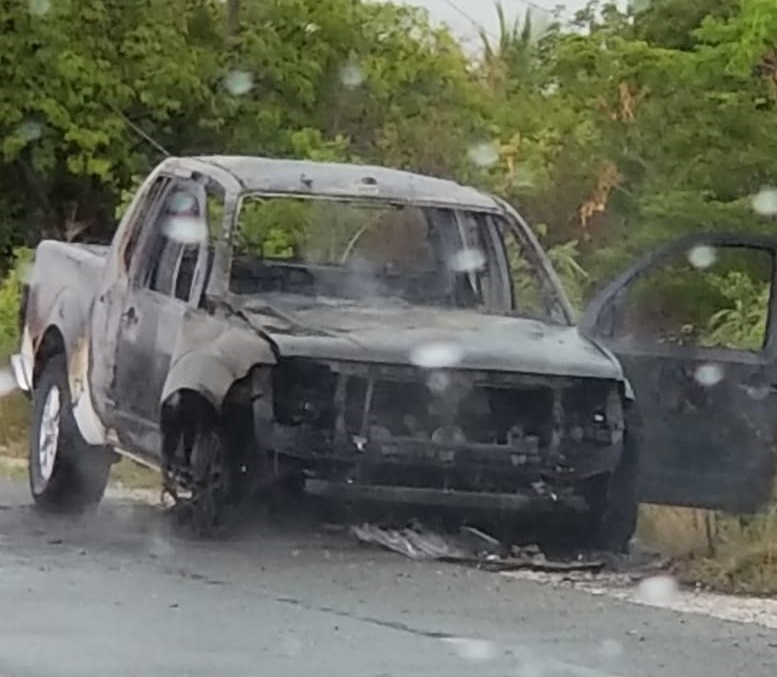 #Providenciales, May 17, 2019 – Turks and Caicos – A brand-new Ford Frontier truck is nothing more than a charred metal frame after bursting into flames during a freak lightening storm over Providenciales this morning and for a while, the driver Denis Estimable, was trapped in the blazing truck.

Denis was eager to share his story tonight, thanking God that he is alive and he was even more grateful that his children were already dropped off at school when the horrible fire broke out.

It is a widely believed notion, that a vehicle on its rubber tires is the safest place to be in a lightning storm.  However, everything Denis told Magnetic Media tonight conflicts with that long-held thought.

“I was just driving along and the lightning hit the front of the truck, it just hit the truck.  And when it hit, the truck cut off.  All the power in the truck was gone.  It just stopped working.  I tried to get it off the road, but all I could see was smoke and I couldn’t get out.  When I tried the door, the door wouldn’t open. I just kept pushing and pushing and pushing until the door opened.”

Add to this frightening predicament, Denis said he tried to put the fire out.  He got a bucket of water, but said when he came back, it was too late.  Just too much smoke and too big a fire.

“I thank God that it was just me, only me was in the truck.  I already dropped the children off.  If there were in there, that would have been big trouble for me.”

A co-worker said Denis was shaken, badly but only emotionally; the employee of Waterloo Investment Holdings walked away completely unharmed.

“I just came home… I guess God was not ready for me yet.  Only when He is ready, I will go.”

The truck, purchased brand new last year, is a total loss and the inferno was caught on cell phone camera by several motorists travelling on the Long Long Bay Road, near the laundromat and Tower Drive around 8 a.m. today.

It is said the fire department arrived quickly and police cordoned off the area until it was safe for use.

Residents expressed concerned at the scene and many are just happy to hear that Denis is doing fine.