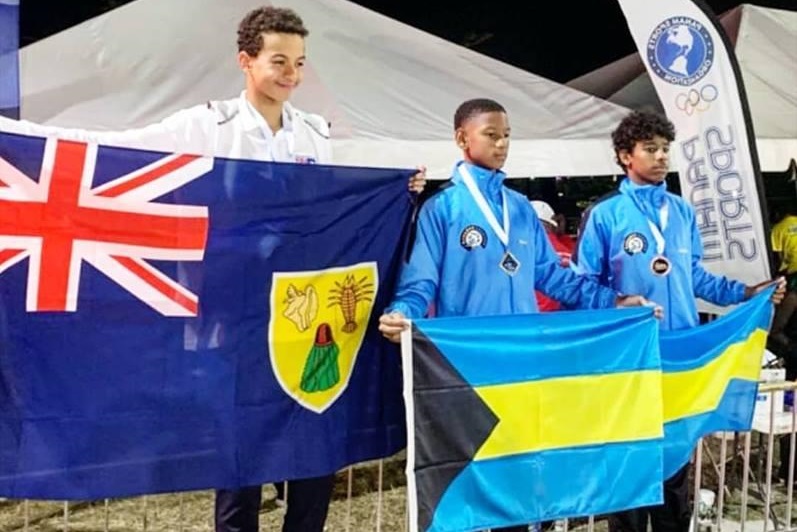 #Providenciales, April 22, 2019 – Turks and Caicos – “Fantastic”, “amazing” were the words Rohan Shearer used to describe his feelings after historically winning a silver medal on Saturday in the 50m backstroke for TeamTCI at the Carifta Swim Games in Barbados; he was being interviewed by Alvin Parker of the Turks and Caicos Islands Department of Sports.

Alvin seemed equally as elated with the TCI’s first Carifta Swim medalist who topped even Parker’s decent height, young Shearer eagerly flowed with the jubilation of the moment and gave comments just after his silver medal presentation, on the podium poolside at the Barbados Aquatic Center.

Rohan, son of Phillip and Christine Shearer, proved that his speed in the pool is not fluke; on Sunday morning he repeated brilliance by qualifying for the finals of the 100 metre; 12-year-old Shearer was first in his heat.

Shearer was told by Mr. Parker that he is an inspiration.

Humbly and professionally, the young swimmer who trains in the United Kingdom, turned the spotlight to his team.

“I say they are all fantastic, all amazing athletes…” Rohan also shared the wearing of the medal with Parker, who remarked on the young man’s prowess on the soccer pitch and now gushed about his breakout performance for TCI swimming.

The roughly 90-sec interview was more of an expression of total gratitude, sincere congratulations and yes, lots and lots of excitement at Rohan’s feat than anything else; the guys were obviously having a great time in the cell phone video recording which is posted to the Sports Department Facebook page.

With a few chest thumps by Parker to confirm Rohan’s power in the pool, the interview was a wrap, at least for now.