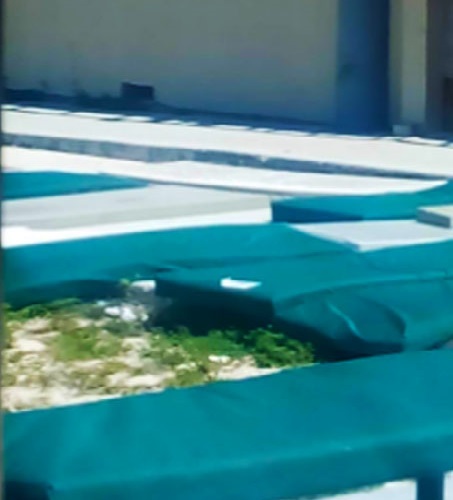 Grand Turk, March 19, 2019 – Turks and Caicos – Officials seem unable to contain the craziness at Her Majesty’s Prison in Grand Turk; another live online broadcast from the beleaguered facility is causing outrage and appall.

Smoking, what appears to be ‘weed’, drinking what looks to be ‘top shelf’ Hennessy brand cognac with glass bottles appearing in the video, blaring music, dancing, gleefully speaking to viewers and using prison-outlawed cell phone devices to do it. It appears that life for at least four young men in prison in the TCI is a party.

The men are convicted for very serious crimes: murder, armed robberies of jitneys and breaking into a tourist’s hotel room in an attempt to rob.

A few weeks ago, there was no party but rather a disease outbreak as scabies infested HMP, again.

Bedding and other items were tossed outside after ‘Chapel’ area inmates complained of itch and rash. Three inmates may have caught the skin infection, believed brought into the population by a man from the Dominican Republic charged with poaching.

Magnetic Media received no response to our queries of the reported scabies outbreak, when we reached out to the Minister of Home Affairs, Delroy Williams.

Inmates have had to reside in the Chapel area following the loss of housing space due to fire and the hurricanes.

It is unclear if the disease is contained and whether the proper health checks are performed on migrants arrested for illegal fishing and illegal entry. It is not the first time for a scabies scare at the prison. The Detention Centre has also suffered repeated outbreaks of scabies.

As for the party from prison streamed live on Sunday on social media, the Minister did comment and said: “The superintendent of the prison has confirmed that it is the prison (and inmates in the video) and they are dealing with the individuals.  I have budgeted this year for to deal with the ongoing problems of the prison.”