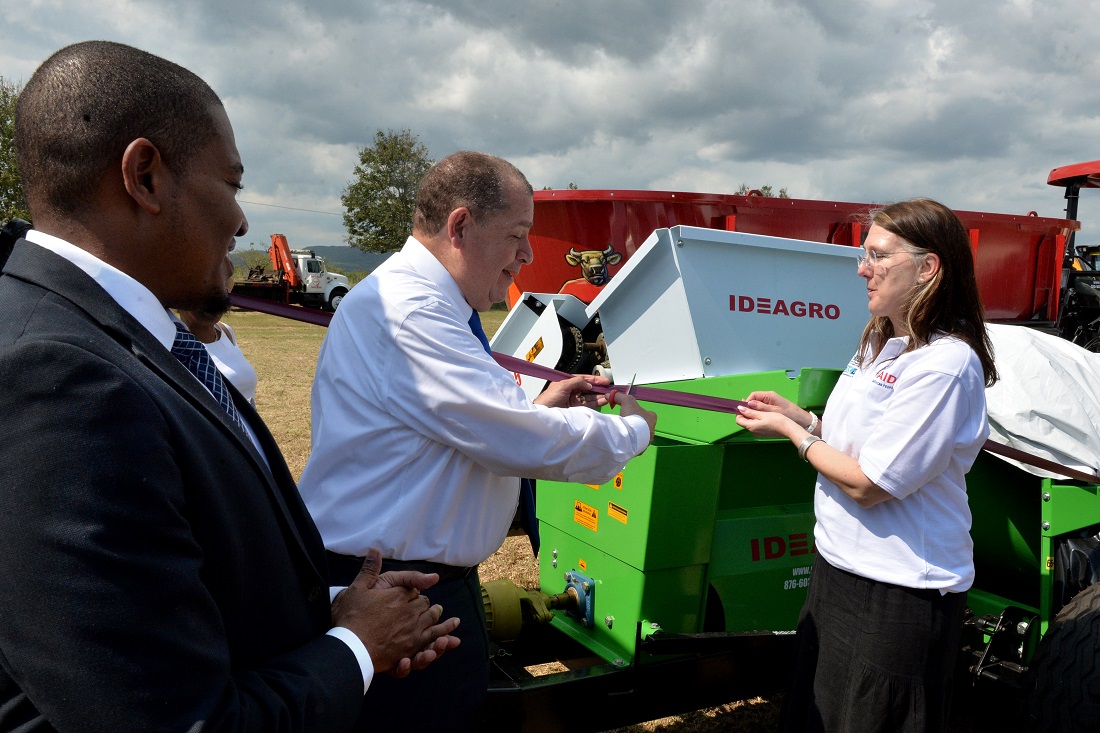 #Kingston, March 19, 2019 – Jamaica – The Government is assuring dairy farmers that it is committed to the growth and development of the industry, and wants to see milk production restored to the high levels experienced in the mid-1980s to early 1990s.

During that period, Jamaica produced approximately 40 million litres of liquid milk.  Industry, Commerce, Agriculture and Fisheries Minister, Hon. Audley Shaw, says Jamaica “is only producing about 50 per cent of the milk we consume today”.

He was speaking at the handover of a silo press and packer to the Jamaica Dairy Development Board, at the Bodles Research Station in Old Harbour, St. Catherine, on March 14.

“With all the land we have in Jamaica, we should be self-sufficient in milk and we should be exporting processed and even fresh milk,” the Minister said.

“We need to expand our local production of milk as we work towards a reduction of our high food-import bill,” he added.

Mr. Shaw further argued that for Jamaica to achieve increased production and expansion of the dairy industry, addressing the constraints that negatively impact the sector, which include poor animal nutrition, is required.

The equipment handed over was secured at a cost of approximately US$12,000 under the Jamaica Rural Economy and Ecosystems Adapting to Climate Change (Ja REEACH) project, which is funded by the United States Agency for International Development (USAID), and will improve access to nutritious feed material for cattle.

“The silo press will be able to pack up to 50 tonnes of silage at a time. With this intensified conservation of forages and other feeds, we believe we will be able to stem production losses, particularly in the dry season,” Mr. Shaw said.

He added that the silo packer presents an opportunity for others, in particular sugar-cane farmers, to dedicate a percentage of their crop towards animal feed.  Feeding sugar cane to all classes of livestock, including cattle, has become commonplace, as it is a good source of nutrition for those animals.

“It is the intention of the Board to significantly increase the quantity and availability of conserved forages in the form of hay, haylage and silage in the upcoming months to offer our farmers low-cost options for feeding livestock and expanding production,” Mr. Shaw said.

Meanwhile, the Minister informed that the Ministry is working to redevelop the Bodles Research Station in order to return it to its pride of place as a symbol of excellence in agricultural research in the Caribbean.

“So, in addition to the provision of modern equipment and techniques, we are also engaged in the rehabilitation of infrastructure, and here at Bodles, $300 million was allocated in the 2018/2019 financial year on redevelopment projects,” the Minister pointed out.

To date, work is advanced on a number of buildings, including a cattle barn, the bio control laboratory, the sewerage system, farrowing pen, administrative building and bathroom facilities, which have been renovated. By the end of the financial year, it is expected that some $140 million would have been expended.

For his part, newly appointed State Minister in the Ministry, Hon. Floyd Green, told students who were in attendance that more young people should look to agriculture as a viable alternative. They included students from the College of Agriculture, Science and Education (CASE) and the Sydney Pagon STEM Academy.

Header: Minister of Industry, Commerce, Agriculture and Fisheries, Hon. Audley Shaw (centre), cuts the ribbon to symbolically hand over a silo press and packer to the Jamaica Dairy Development Board, at the Bodles Research Station in Old Harbour, St. Catherine, on March 14. Observing (from left) are State Minister in the Ministry, Hon. Floyd  Green, and Chief Operating Officer of Agricultural Cooperative Development International and Volunteers in Overseas Cooperative Assistance (ACDI/VOCA), Sylvia Megret.

Insert: Minister of Industry, Commerce, Agriculture and Fisheries, Hon. Audley Shaw, emphasises a point at the handover of a silo press and packer to the Jamaica Dairy Development Board, at the Bodles Research Station in Old Harbour, St. Catherine, on March 14.