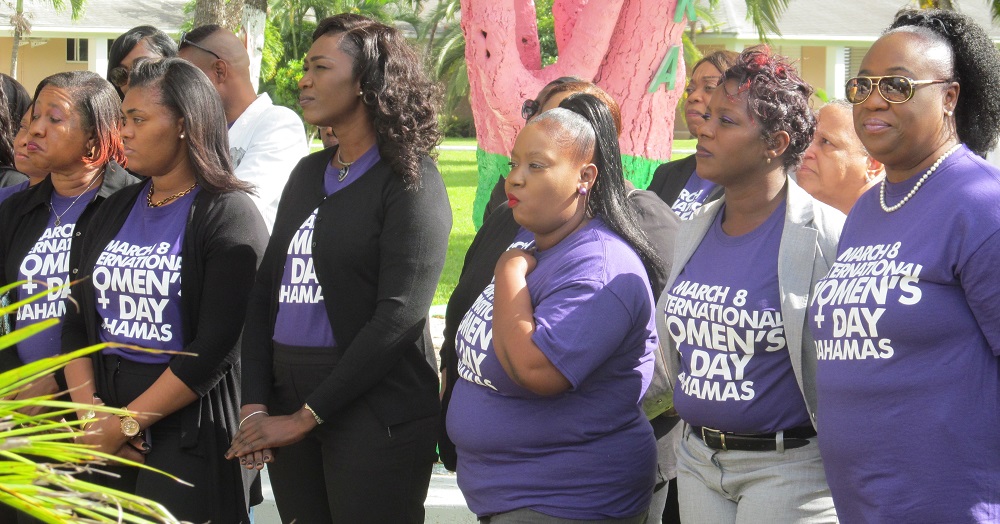 #Nassau, March 8, 2019 – Bahamas – The push towards gender equality for women in The Bahamas, and indeed around the globe, is not about advancing the causes of women and girls at the expense of men and boys, Minister of Social Services and Urban Development the Hon. Frankie A. Campbell said Thursday. Minister Campbell called gender equality “a human rights issue”.

Addressing a Pep Rally held outdoors on the Campus of The University of The Bahamas (UB) Thursday (March 7) on the eve of the international observance of International Women’s Day (commemorated annually on March 8), Minister Campbell said gender equality is also about ensuring that both sexes are sufficiently empowered so that they can be equally empowered.

“And so the Department of Gender and Family Affairs is about promoting the cause of the family. It is about promoting the partnerships that are necessary to ensure that our society is comprised of both men and women and boys and girls who respect each other; who have an appreciation for the value that each brings to the table sufficiently so, that we are able to speak love and not war, to speak peace and kindness, that we are able to speak inclusion of all.”

Minister Campbell said organizers of the event decided to stage the rally outdoors because of the symbolism attached to being outdoors. The Rally was a collaborative effort between the Department of Gender and Family Affairs, Ministry of Social Services and Urban Development and UB.

“We could have held the event indoors, but it is important for us to be out here in the open to express our sentiments openly with the hope and trust that they would become infectious and that those hearing what we had to say, having first been touched by the infectious spirit, would share one with the other, and that this infectious spirit would spread like wildfire,” Minister Campbell said.

“I am the father of three beautiful girls who are going to be looking for husbands in the future. It would be remiss of me, it would be foolish of me to promote the cause of women; leave all of the boys of young men and boys behind and then years from now when they are looking for husbands, they cannot find sensible, educated, productive young men to partner with.

“As we celebrate this International Women’s Day. As we think equality, as we think of innovating change, let us begin to be the change that we want to see. Let us begin to ensure that in our lives and around us, there is equal room for all, despite our differences, and that there is a level of tolerance that will promote the kind of society where everyone will have equal opportunity for advancement while not impeding someone else’s opportunity,” Minister Campbell added.

Insert: Minister of Social Services and Urban Development the Hon. Frankie A. Campbell (far right) was the keynote speaker at an International Women’s Day Pep Rally held on the campus of The University of The Bahamas Thursday (March 7) on the eve of international celebrations commemorating International Women’s Day (observed annually on March 8). Also pictured (from left) are: Pastor Eric Fox and Dr. Linda Davis, Provost, The University of The Bahamas.