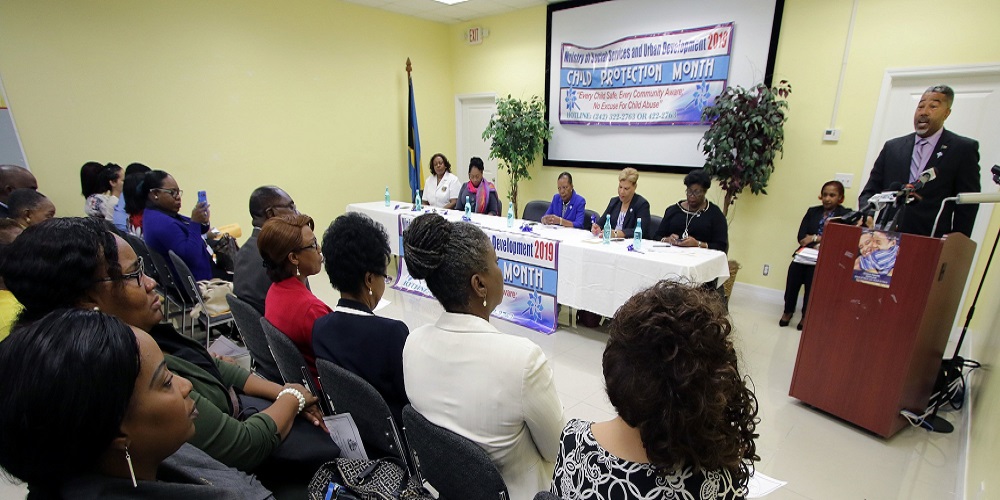 #Nassau, March 29, 2019 – Bahamas – Minister of Social Services and Urban Development, the Hon. Frankie A. Campbell Wednesday admonished parents, guardians and communities across The Bahamas to do their part to ensure the safety of Bahamian children everywhere.

“The future of our nation depends on it,” Minister Campbell said.

Addressing a Press Conference held Wednesday (March 27) to announce plans for the observance of Child Protection Month – the Month has been observed annually in April in the Commonwealth of The Bahamas since 1992, marking 27 consecutive years, Minister Campbell said he subscribes to the African Proverb that it takes a village to raise a child. Mr. Campbell said the proverb has gained even greater significance in light of the recent spate of reported child abductions.

“In light of the recent spate of reported child abductions, it is very important for communities to re-subscribe to the philosophy that it takes a village to not just raise a child, but to keep all children safe,” Minister Campbell said.

“Sadly, child protection is not given the priority that it deserves by the community and too often, is minimized,” Minister Campbell added.

“Parents need to accept that it is okay for family members, neighbours and persons in the community to admonish the children where necessary. To have the kind of relationship that will result in neighbours and extended family members feeling that they are duty-bound to look out for the interests of all of our children.”

“Communities need to be alert and aware of the presence of strangers and suspicious activities related to children and young persons. Neighbours and community members need to be prepared to report matters and be prepared to give evidence, where necessary.

“It is important to note that even in cases where abuse is suspected, reports should be made because it is better to err on the side of caution than for one case to go unreported. Each case is treated on its own merit and because there is broad networking with other stakeholder specialists, matters are referred based on the intervention required.”

The Child Protection Unit, Department of Social Services, Ministry of Social Services and Urban Development, in conjunction with the National Child Protection Council (NCPC) and the Suspected Child Abuse and Neglect (SCAN) Unit of the Ministry of Health, have aligned to stage a number of activities as part of the education and awareness campaign. The Month will be observed under the theme: “Every Child Safe, Every Community Aware: No Excuse for Child Abuse.”

Minister Campbell said careful planning has gone into the activities scheduled for April. These include child abuse/child protection awareness campaigns in the Family Islands, distribution of flyers from major intersections in New Providence, the launch of the “Net Smart Campaign” by the National Child Protection Council (NCPC) that highlights the dangers associated with the improper use of the Internet.

The SCAN Unit will also host a Child Abuse Poem Competition and a series of Child Abuse/Child Protection Exhibitions scheduled for the Ministry of Health Headquarters, Meeting Street (April 1, 2019); the Princess Margaret Hospital (April 8) and the Mall at Marathon (April 15).

Additionally, officials are set to plant a Pinwheel Garden at Government House, Mount Fitzwilliam, and will host a Child Abuse/Child Protection Workshop for child minders in childcare facilities. An In-house poster competition will be held in all of the Departments/Divisions of the Ministry of Social Services and Urban Development as a means of “generating even greater awareness amongst clientele.”

“Stop and Think” Campaigns, facilitated by the NCPC and designed to target 200 students each as a means of educating teachers and students on the dangers of internet use, are also among the activities scheduled for Child Protection Month.