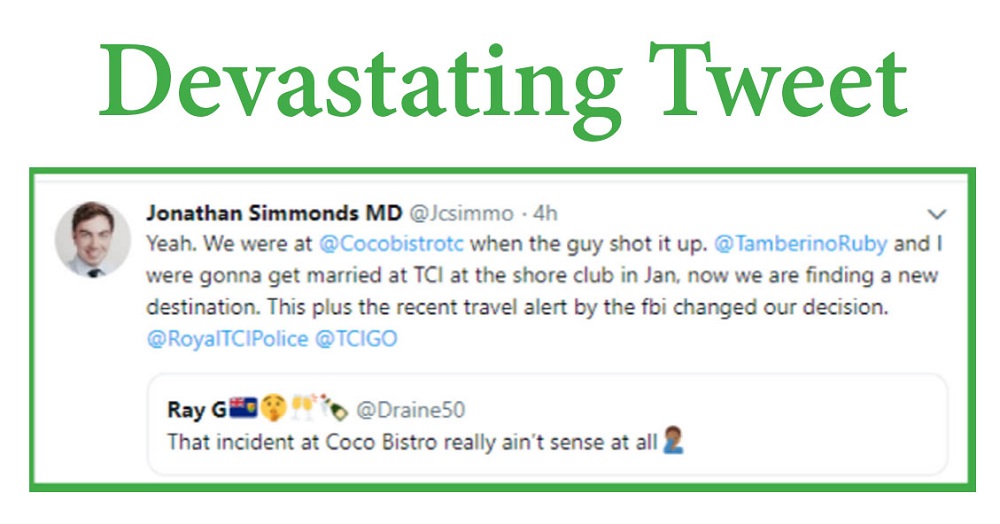 #Providenciales, March 14, 2019 – Turks and Caicos – A Boston doctor has already Tweeted about the scary situation last night at Coco Bistro in Providenciales and he says it has changed his mind about the destination.

Dr. Jonathan Simmonds tweeted this about four hours ago: “when the guy shot it up” and that “were gonna get married at TCI at the Shore Club in Jan, now we are finding a new destination.  This plus the recent travel alert by the FBI changed our decision.”

Seems no matter how much Turks and Caicos claims to be low-crime and safest in the region – which are true – these gun wielding bandits are destroying that reputation, one crime at a time.

The daring armed robbery last night at the popular Grace Bay restaurant CoCo Bistro sent guests scampering as they tried to take cover when robbers burst on the scene with a dastardly agenda.

Reports are that around 9:30 p.m., there was a robbery attempt of a tourist at the garden styled restaurant and a gun-shot was fired in the air, which caused a chaotic scene to erupt as people tried to get to safety.

A WhatsApp voice note in circulation said: “The way this thing just happened, N***gas just run up in Coco Bistro yard, just now, I’ein know who they was looking for, and buss a shot off in the air.  Everybody scared right now, that’s some serious sh#!.”

The man speaking expressed serious concern about the reputation of the Turks and Caicos as a tourism destination and he is not alone.

“Its’ time for the law-abiding citizens of this country to send a clear message to the criminal elements in our society.  We cannot afford for a few bad apples to destroy our economy and livelihood.  Enough is enough.”

Over the weekend there was an armed robbery rampage, where pedestrians in the Grace Bay and Turtle Cove areas were approached by gunman demanding cash.  Police announced that patrols and policing activity would be beefed-up.

In February the US Department of Homeland Security issued a Level 2 Travel Alert on the Turks and Caicos Islands.