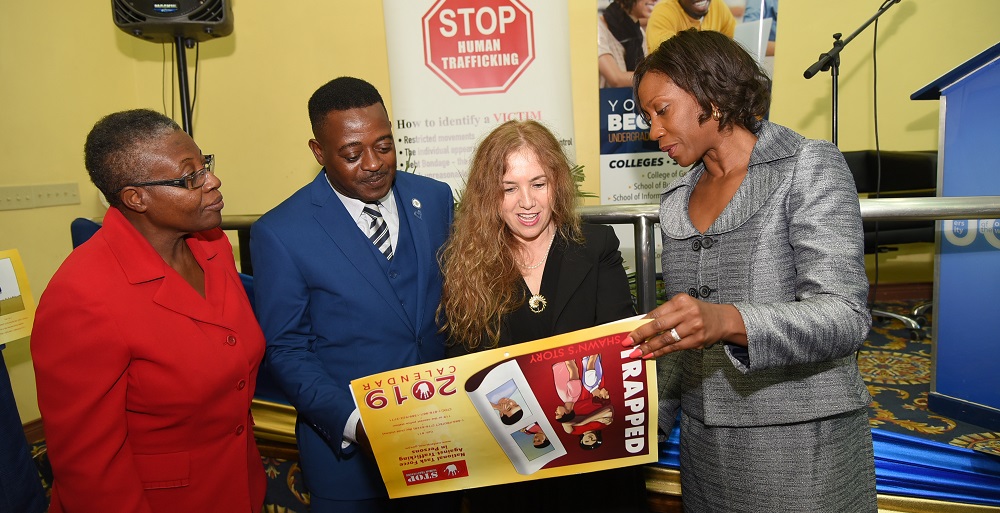 #Kingston, February 13, 2019 – Jamaica – The National Task Force Against Trafficking In Persons (NATFATIP) is seeking 10,000 volunteers to aid in the fight against the scourge in Jamaica.

“We’re looking for volunteers and anti-human trafficking champions in Jamaica at all levels – churches, communities, youth clubs and places of business – to join this ‘whole of country’ fight against trafficking in persons,” said Chair of the NATFATIP Prevention Subcommittee, Sandra Graham.

She was addressing the distinguished lecture series on human trafficking held at the University of the Commonwealth Caribbean (UCC) in St. Andrew on Tuesday (February 12).

Ms. Graham, who is also Director of Corporate Services in the Ministry of Justice, said that the volunteer support is part of measures to ensure sustainability of Jamaica’s anti-trafficking efforts.

“Sustainability requires that we build capacities across institutions, among State and non-State actors, generations and in communities,” she said.

Ms. Graham said that Jamaica sees the benefit of advancing a joint approach, involving various stakeholders, to address human trafficking, and in 2004, established NATFATIP as a multisectoral body to lead the country’s response to the problem.

The country has since enacted new legislation and amended relevant laws to combat the scourge, she noted.

Ms. Graham said there is heightened awareness about human trafficking in Jamaica, but “we need to do more as a country to eradicate this heinous crime”, which she noted, undermines human rights and the democratic principles of society.

“Human trafficking presents a human and social development challenge to societies,” she added.

Interested persons can register to become a volunteer by visiting the NATFATIP website (https://natfatip.moj.gov.jm/) and completing an application form.