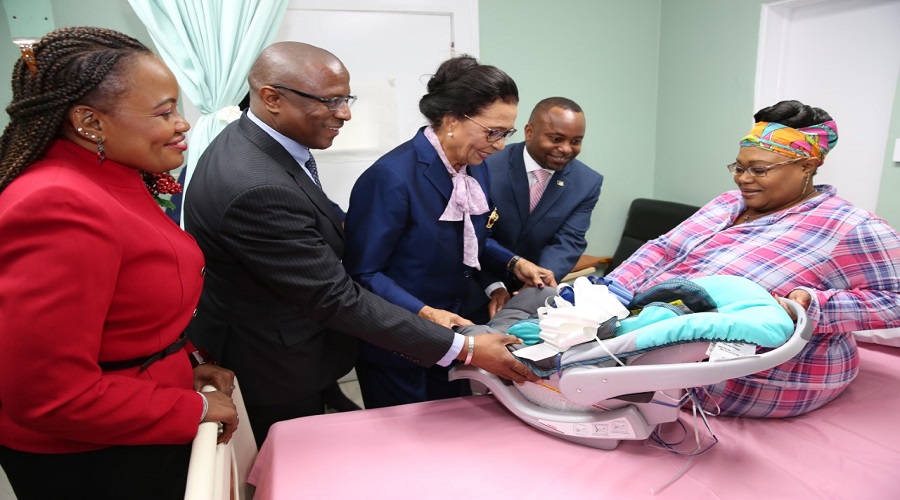 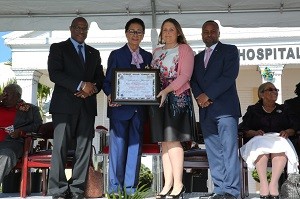 #Bahamas, December 17, 2017 – Grand Bahama – A message of thankfulness was shared on Wednesday, December 13, by Governor General Her Excellency Dame Marguerite Pindling during the 19th Annual Goernor General’s Visit to the Rand Memorial Hospital, under the theme “Celebrating our Health Partners.”

“I am aware that the hurricane which affected Grand Bahama, Abaco and Bimini earlier this year has been a source of deep concern because of the resulting damage and disruption this natural disaster brought to some.   Notwithstanding this, we must ever be thankful that no lives were lost, and that we are enabled to press forward to recover and renew our activities and our communities.”

She further added, “This is the time of the year when our hearts and minds begin to swell in anticipation of the coming celebrations, and when we focus our minds and hearts on the miracle of our salvation, and the real meaning of the events which took place some 2,000 years ago in Bethlehem.”

The Governor General commended the staff for the reports of high calibre service and their devotion to providing service selflessly.   “Your service to the Grand Bahama community and the nearby islands is indeed commendable, and I know that you have earned the respect and gratitude of all.”

Gathering at Christmas to celebrate the birth of Jesus Christ is always special, she said.   As people are exchanging greetings and celebrating, Dame Marguerite urged them to remember the love given through the birth of our Saviour, and as such, they should share and spread love with all those they come in contact with.

“As we exchange greetings and gifts, let us be conscious of the real meaning of the season, and seize the opportunity to focus on the many blessings received and given.”

Also giving brief remarks during the ceremony were Acting Minister of Health, the Hon. Michael Pintard and Minister of State in the Office of the Prime Minister, Grand Bahama, Senator the Hon. J. Kwasi Thompson.   The Public Hospitals Authority of Grand Bahama Health Services used the opportunity to honour Pioneer Health Partners (physicians and nurses) in the West End Community Clinic and retired and deceased health partners.   Many local businesses and service clubs were also honoured for their assistance to GBHS.

Following the official ceremony, Her Excellency was taken on a tour of the hospital, when she had the opportunity to stop and visit with a few patients.

Header:  MERRY CHRISTMAS – Dame Marguerite Pindling, Governor-General, was on Wednesday, December 13, in Grand Bahama for the 19th Annual Governor-General’s Visit.  Following a ceremony, Dame Marguerite toured the Rand Memorial Hospital, accompanied by Hospital Administrator, Sharon Williams; Acting Minister of Health and Minister of Youth, Sports and Culture, the Hon. Michael Pintard; and Minister of State in the Office of the Prime Minister, Grand Bahama, Senator the Hon. Kwasi Thompson. The group stopped in and visited with an expectant mother, Nickita Campbell and presented her with the gift of a baby carrier. (BIS Photo/Andrew Miller)

Insert:  SHOWING APPRECIATION – During the 19th Annual Governor-General’s visit on Wednesday, December 13, the Grand Bahama Health Services presented a number of corporate partners with a plaque. Shown from left are: Acting Minister of Health, and Minister of Youth, Sports and Culture, the Hon. Michael Pintard; Governor-General of The Bahamas, Her Excellency Dame Marguerite Pindling; Lynne Fraino, Kelly’s Freeport Ltd.; and Minister of State in the Office of the Prime Minister, Grand Bahama, Senator the Hon. Kwasi Thompson. (BIS Photo/Andrew Miller)