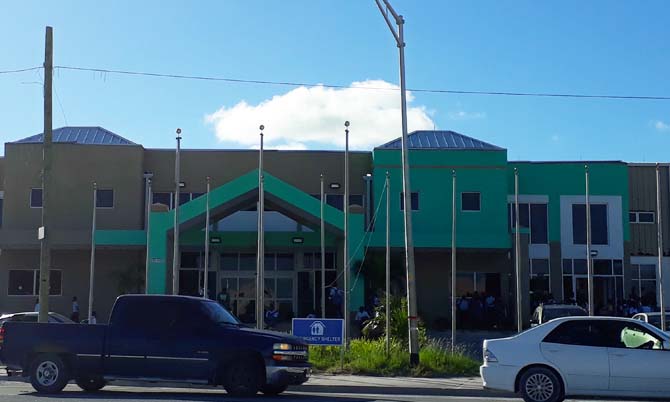 PROVIDENCIALES, Turks and Caicos Islands – November 8, 2017 – The Ministry of Education says it is reviewing repairs after a few nights of rain have led to leaky roofs and flooded floors for students of the Oseta Jolly Primary school stationed temporarily at the Gus Lightbourne Gym in downtown Providenciales.

Minister Karen Malcolm, paused from House of Assembly meeting being held Wednesday in Grand Turk to speak to Magnetic Media following a concern expressed by a teacher of the school who said cleaning the doused floors and desks is becoming too time consuming for educators and students.

The Teacher said something needs to be done to rectify the leaks and the Minister agrees.

Minister Malcolm said already the Department of Public Works was looking into the situation; a roof which was thought to have been fixed is obviously not.  The Minister also explained that the dividers for the open space where grades two through six are being held are not done, but should be completed by this weekend.  Materials have been bought and construction on the separations for the classrooms is a work in active progress.

The explanation on the dividers was in response to that teacher who said the near 500 children are sharing the open space at the gym but it is near impossible to get the students to focus on their individual lesson with other classes ongoing; the openness is proving distracting and students, shared the teacher are often missing the message.

Again, the Minister expressed her understanding of the predicament and asked for understanding as well.  Saying essentially that her ministry has struggled to find a place for thousands of children across the archipelago left displaced by the category 5 plus, Hurricane Irma on September 7; its a big task which the Ministry is managing and tweaking to ensure that there is comfort, safety and stability as the children learn and the teachers teach.

There was a promise to have those dividers completed on the weekend and a promise to work with the Estate Department of TCIG to get the cleaners taking on the chore of mopping up water, when there is rainy weather.

Permanent Secretary of the Ministry of Education, Wesley Clerveaux, who we also reached out to said there is no disregard by the ministry going on, adding that the minister has been visiting all schools weekly to ensure progress is being made for a return to life as normal for public education.

This is the first week the entire student population of Oseta Jolly is at school.  The children from Early Childhood to Sixth Grade and their teachers are facilitated at two locations in downtown Provo; the Gus Lightbourne Gym and at the Edward Gartland Youth Center.