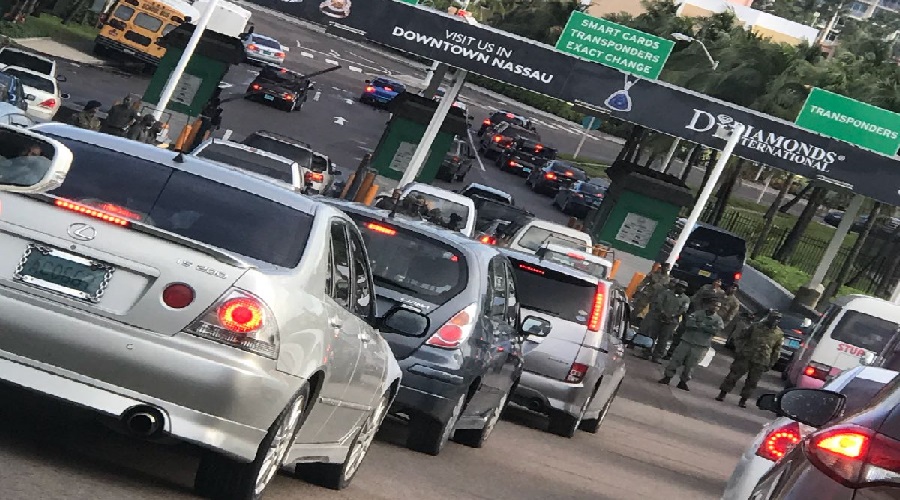 #Bahamas, November 15, 2017 – Nassau –Dramatic images on TV and in print – Bahamas Immigration Enforcement Unit out in brazen fashion to crack down on illegal migration.  T he Prime Minister is on the case as well and is awaiting a report of how a huge wooden sloop, said to be loaded with possibly 250 illegal Haitians and only heaven knows what else made it onto a beach in south west Nassau.

The boat is said to have been aided, but the mystery remains about who would or could be involved in the successful landing on Adelaide Beach.   The Immigration Department in a mandated hunt for the illegals is rounding up other people who are in The Bahamas without legal status; no one from the weekend sloop has been found.  Some have been found without work permits or expired work permits.

Both the Royal Bahamas Defence Force and the Bahamas Immigration Department have been ordered to find the illegal migrants, believed to be from Haiti.

In fact, in a very blunt statement, the PM’s Press Secretary, Anthony Newbold said:  “I know that the Minister of National Security has commented on the issue, but the Prime Minister still needs a report.  What happened and the degree is totally unacceptable in 2017.  The Prime Minister is also deadly serious about the December 31 deadline for illegals to get out and he will not be deterred by those who would coddle anyone who breaks the law.  Being humane is fine, but breaking the law is another [thing] and we are a country of laws.   Accountability is intended to be one of the hallmarks of the Minnis administration’s good governance policy.”

A recent report from Immigration Enforcement Unit leader, Kirkland Neely reveals that 57 people residing illegally in The Bahamas have been arrested now.

“We got 57 people on Tuesday including Haitians, Jamaicans, Chinese and Dominicans.   There were four Haitian children included in that number.  Four buses and up to 80 officers from Immigration are involved in the island wide sweep.”