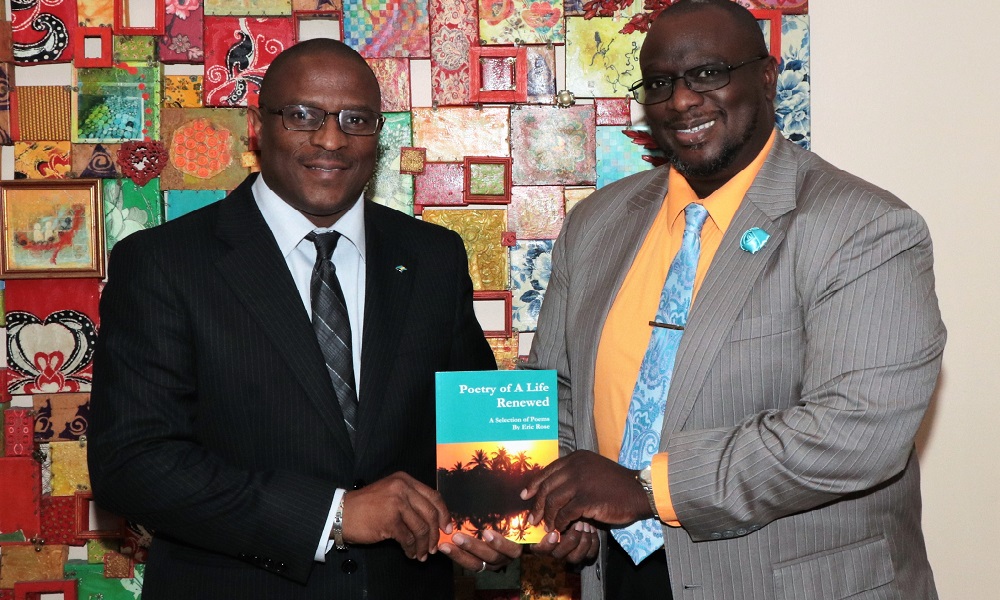 #Bahamas, October 25, 2017 – Nassau – Veteran journalist and award-winning poet and photographer Eric Rose presented a copy of his book, Poetry of A Life Renewed to the Minister of Youth, Sports and Culture the Hon. Michael Pintard during a courtesy call at the Ministry on Monday.

Born in Nassau, The Bahamas, to Doris McFall of Inagua and the late Cecil Rose of Cat Island, Mr. Rose has had a distinguished journalism career that began upon receiving his Mass Communications and Journalism Associates of Arts degree from The College of The Bahamas, and his Print Journalism Bachelor of Arts Degree from Clark Atlanta University (CAU).   At the same time, he became the first of his mother’s children to attend college.

At CAU, Mr. Rose was also awarded the Internal Journalism Award and served as Editor-In-Chief of the newspaper, “The Panther,” as well as acted in a number of plays.

He most recently obtained his International Masters in International Communications at the Communications University of China, in Beijing.  He was also the Class Monitor (President) and was one of the several chief researchers in the WeCreate Global Innovation Team of the New Media Institute at CUC.

While in China, Mr. Rose became the first foreigner to win a top prize in the prestigious Ying Shi Ju (Mandarin Chinese for ‘taking photos, telling story, being together’) photography competition, which had been running for 12 years.

He won the still-life category in the contest and his win was even more noteworthy because he had two photographs in the finals, both taken in the Bahamas and the winning one being taken in San Salvador.

Also while in China, he introduced Bahamian culture during a presentation on Junkanoo at The High School Affiliated with Beijing Normal University, was one of only four international delegates invited to sit at the head table during the welcoming banquet for “Finding China in Yangzhou” in Yangzhou, and was a panelist at the Beijing International Micro-Film Festival “Young Directors in Hollywood” training camp programme, held in the Sanqing Mountain area of Shangrao.   He also appeared on television in China a number of times.

With more than 20 years’ experience as an award-winning photographer and almost 15 years as a photojournalist and writer, Mr. Rose has worked out of The Bahamas, with assignments taking him throughout the United States and as far away as the Caribbean, South America, Europe and The People’s Republic of China.

He also had a double-page spread in American-published “Afar” Travel Magazine (January 2011), and his photos and articles about Bahamian culture have appeared in numerous books and magazines, including “Destination: Islands of The Bahamas”, two issues of “B.A.A.M.”; and Bahamasair’s Inflight Magazine.

As a traveling photographer and photojournalist, Mr. Rose’s images appear in regional and international newspapers and on-line services, with his work featured in spreads throughout various publications.

Mr. Rose was the official photographer for The Bahamas’ delegations to such events as the Meet-In-Beijing and Beijing Pop Festivals, the Isle of Wight (England) Festivals/Junkanoo Exchange and three consecutive Caribbean Festival of the Arts (Trinidad and Tobago and Guyana, respectively).

His fine-art scenery photographs are also on display in major hotels on Cable Beach in The Bahamas and in private residences, as well as in several calendars produced in The Bahamas, and the current Central Bank of The Bahamas Art Gallery Exhibition.

Mr. Rose is a Senior Information Officer at the Bahamas Information Services and performs the duties of a journalist, photojournalist and is a former acting editor, with his work in many dailies and online.    Mr. Rose received The Bahamas’ National Youth Achievement Award in 1992 and the Caribfest Award for Excellence in Literature in 1994 from the College of The Bahamas.

As a teenager, his work with Junior Achievement led him to the post of the first International Vice President of the organisation’s International Students Forum, which garnered him a guest spot on the American cable network Black Entertainment Television’s show “Teen Summit” (the first Bahamian to appear on the talk show) and a chance to say “Good Morning!” on the nationally-syndicated morning programme “Good Morning, America.”

Mr. Rose also delved into the music world, producing loop-based tracks that made it to the top of Sony’s AcidPlanet charts for World, Latin and Electronic music sub-genres, respectively, in the early 2000s, and was featured in radio commercials and a television show in The Bahamas.

Mr. Rose shares his poetry on several broadcasts and at concerts and festivals, including Carifesta IX in 2006 and Carifesta X in 2008.   He also read poetry before two consecutive Bahamian Governors-General, co-hosted a number of poetry shows and a limited production of “Lorraine Hainsberry: A Work in Progress,” in Atlanta, GA, showcased his original poem “Fairy Tales.”   In print, his poetry has represented The Bahamas in the Carifesta Anthology of Poetry and four issues of the University of the West Indies Poui Journal of Creative Writing.

He has one son, Antonio Carlos, and has worked in the past with various churches and civic groups, including The Family: People Helping People, Toastmasters and Kiwanis.

Photo caption:  Minister of Youth, Sports and Culture the Hon. Michael Pintard (left) receives a copy of the book, Poetry of A Life Renewed from veteran journalist and award-winning poet and photographer Eric Rose, during a courtesy call at the Ministry, on October 23, 2017.