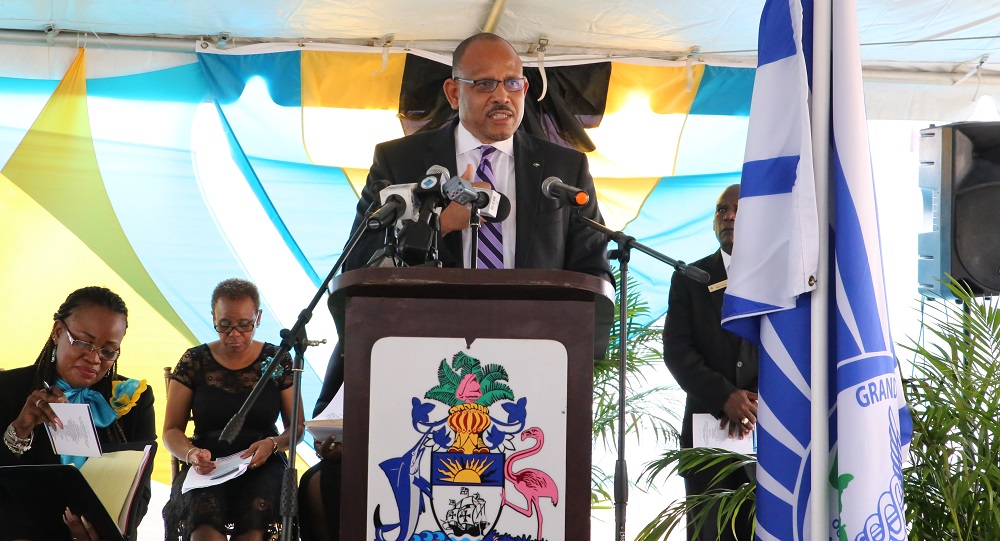 #Bahamas, October 9, 2017 – Grand Bahama – A key feature of the newly renovated West End Clinic is the provision of an ambulance, which will afford 24-hour EMS services to the residents of West End.

“This marks the first time a state of the art ambulance with a crew of trained NEMS technicians will be stationed here,” said Minister of Health, Dr. the Hon. Duane Sands.   “What this means is that we will be able to improve response times to emergency calls for residents of West Grand Bahama.”

He pointed out that the project was built at a cost of over $2 million.    “That is what it cost to transform the two pre-existing structures on this property into a single 6,348 square-foot modern health center,” said Minister Sands.   “Indeed, the expansion of the clinic has doubled its capacity, and patients will experience an enhanced environment that offers additional and improved services.”

According to the Health Minister, the West End Clinic will offer primary care, as well as improved dental care and trauma services to the people of West Grand Bahama.   He noted that a newly acquired portable digital X-ray machine will allow emergency patients off-site access to radiology services.

“The growth and development of health infrastructure and services here in Grand Bahama and across the Family Islands reflects the evolving nature of healthcare and the continually expanding demand for health services by the public,” said Minister Sands.

“We know that community health clinics provide primary health care as the entry point into the health system.   These clinics also serve as the coordinators of care and services across the health system.   In recent years, significant investments have been made and continue to be made to repair, expand and upgrade public health facilities, to improve access to services by expanding hours of operation in locations more convenient for patients.”

Additionally Minister Sands noted that emergency medical services on the island of Grand Bahama have increased over time to a current staffing level of 29, including 16 trained emergency service technicians and paramedics, and a fleet of six modern emergency service vehicles.

Minister Sands pointed out that on the very site where the newly expanded West End Clinic has been built, the Government of The Bahamas established the first public clinic on the island of Grand Bahama in 1959.   He noted that since that time the Rand Memorial hospital has evolved into an essential lynchpin in the public health platform, providing hospital-based care to the residents of the entire Northern Bahamas.

“The hospital, together with the National Emergency Medical Services and nine outlying community health clinics across Grand Bahama and its adjacent cays, with this facility being one of them, forms the local health system known as The Grand Bahama Health services, or GBHS, operating under the Public Hospitals Authority,” said Minister Sands.

The Health Minister commended the Public Hospitals Authority, as well as those contracted to execute the significant construction and engineering works for the expanded West End Clinic.   He noted that on a previous trip to Grand Bahama, he had the opportunity to tour the newly expanded, fully revitalized public health clinic and can say with confidence that the new facility represents a job well done on behalf of the Bahamian people.

MINISTER’S REMARKS – Minister of Health, Dr. the Hon. Duane Sands was one of the guest speakers at the official opening ceremony of the newly- renovated West End Clinic on Friday, October 6, 2017.   Minister Sands says that the West End clinic has expanded its services to residents and will have full-time ambulance service.