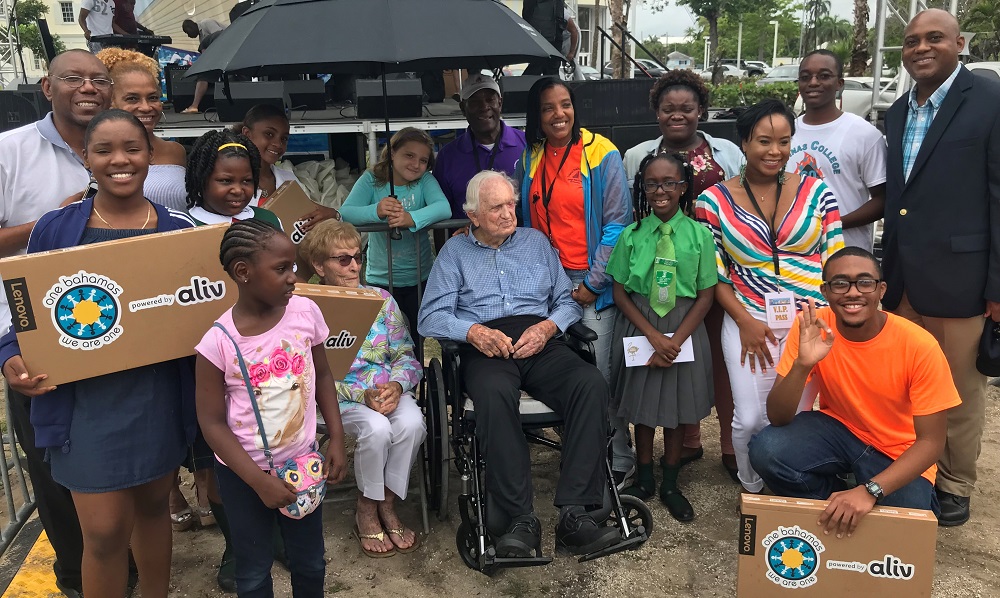 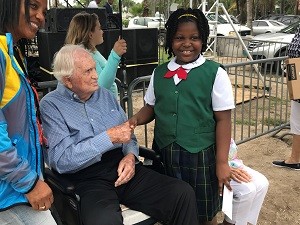 #Bahamas, October 30, 2017 – Nassau – In an effort to continue expanding its corporate responsibilities, ALIV, partnered with the One Bahamas Foundation and Bahamas Primary School Student of the Year Foundation to host the Sir Durward Knowles Essay Competition over the past few weeks.   The competition is just one of several events planned by the One Bahamas Committee in the run-up to Sir Durward Knowles’ 100th birthday on November 2nd. His birthday will put Sir Durward as the oldest living Gold Medalist Olympian in the world.

On Friday, October 27 at Louis and Steens Coffeehouse, West Bay Street, the essay finalist were   announced via live stream powered by Aliv, with student finalist, parents and school representatives present.   This competition was opened to all students at every grade level throughout The Bahamas and received over 200 submissions from 24 schools.  Students wrote on the topics,” Sir Durward Our National Hero and The Life and Times of Sir Durward Knowles.”    The contest allowed students to showcase their skills through Literacy, English Language and Creative Arts.

Principal at Sister Mary Patricia Russell Junior High School in Grand Bahama, JoyAnne Pennerman said, it was an honour to have two of their students placing winners among hundreds of participants across The Bahamas. 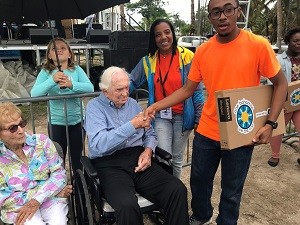 “Given the time frame in which they had to work, I am grateful to the teachers and parents who encouraged and supported Cierra and Shaquan,” she said.   “I am also happy that the Language Arts Department took the initiative to get the students to participate. In addition, it is sentimental as I was Vice- Principal in 2009 when Sir Durward Knowles and Sir Orville Turnquest were special guests at Sister Mary Patricia Russell during a special One Bahamas assembly.   It was the school’s second year in existence and then Principal, Mrs. Yvonne Ward, had organized a grand One Bahamas celebration.   I remember fondly Sir Durward’s pleasant demeanor and fine wit. A special thanks to Mrs. Munnings, Subject Coordinator of Language Arts Department, District Superintendent Ivan Butler, Precious Fortune Thompson and the competition committee.”

Honorable mention for The Lower Primary was given to Amarrone Armbrister a student of Palmdale Primary and the only grade one entrant.

“One Bahamas is committed to providing opportunities and impactful initiatives for students across The Bahamas as we focus more on unifying through education and youth development,” One Bahamas Committee Member, Precious Fortune said.   “We thank every school, student and parent that participated as we are truly One Bahamas.   We were extremely pleased to have many of the family islands participate.   The independent panel of judges all had a difficult task as many of the submissions were just phenomenal.” 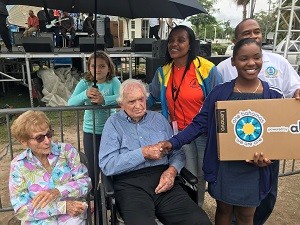 ALIV is proud to be the official telecommunications sponsor of the One Bahamas Foundation.

“We extend congratulations to all the winners,” ALIV Events, Sponsorship and Community Manager, Bianca Bethel-Sawyer said.   “Sir Durward is a living legend for all Bahamians and we were happy to support the essay competition which saw entrants not just from New Providence but throughout the country.   We were happy to assist and to show our support all of the overall winners were gifted with a laptop courtesy of ALIV.”