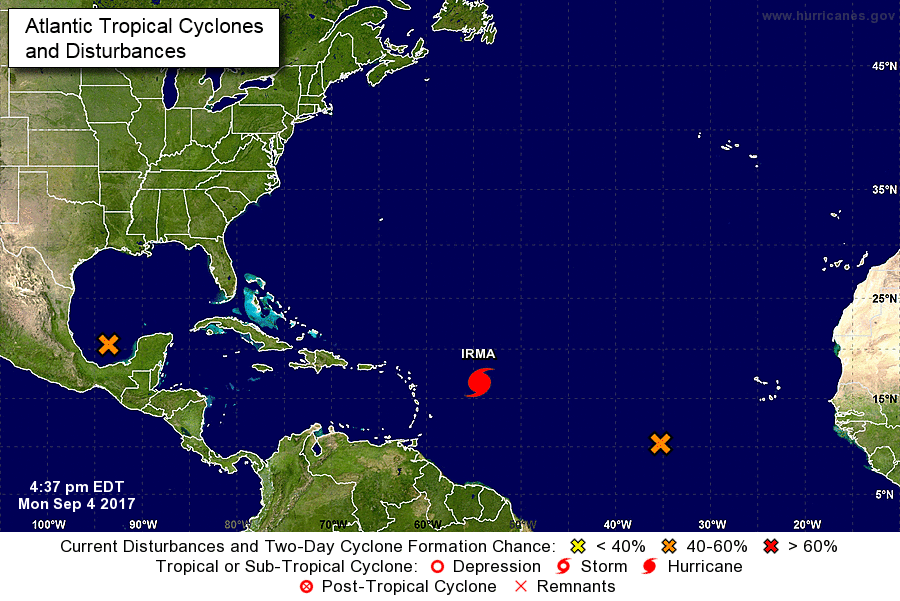 Bahamas, September 4th, 2017 – Nassau – The first set of watches are issued now for the Leeward islands as we all watch apprehensively to see what Irma will do and where the hurricane will actually go.
The National Hurricane Center reports that there is a Hurricane Watch in effect – which means the areas will feel hurricane conditions in 48 hours – for Antigua & Barbuda, Anguilla, Montserrat, St. Kitts and Nevis; Saba, St. Eustatius,Sint Maarten, Saint Martin and Saint Barthelemy.
The latest advisory at 5am says Irma is moving toward the west-southwest near 14 mph and that a turn toward the west is expected later today, followed by a west-northwestward turn late Tuesday.  On the forecast track, the center of Irma will move closer to the Leeward Islands through Tuesday and then be near the northern Leeward Islands Tuesday night.  Irma remains a Category 3 storm with 115mph winds, and Hurricane Hunter inspection has found that Irma is a larger storm now.
Hurricane Irma is already making history, becoming a major hurricane in record time; 30 hours from wave to Category three.
By Deandrea Hamilton