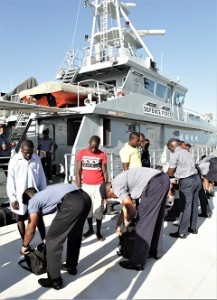 #Bahamas, August 31, 2017 – Abaco – Fifty three Haitians were spotted after being stranded on a cay in Abaco and among them were three children.    The Haitians were on Wednesday picked up in a joint effort involving the #RoyalBahamasPolice and #RoyalBahamasDefenceForce which led to the capture on Tilloo Cay.

There were 44 men, 6 women and three minors who all appeared to be in good health.    HMBS Kamalamee rescued the illegal migrants and the HMBS Coral Harbour brought the group into Nassau and turned them over to the Immigration Department for processing.