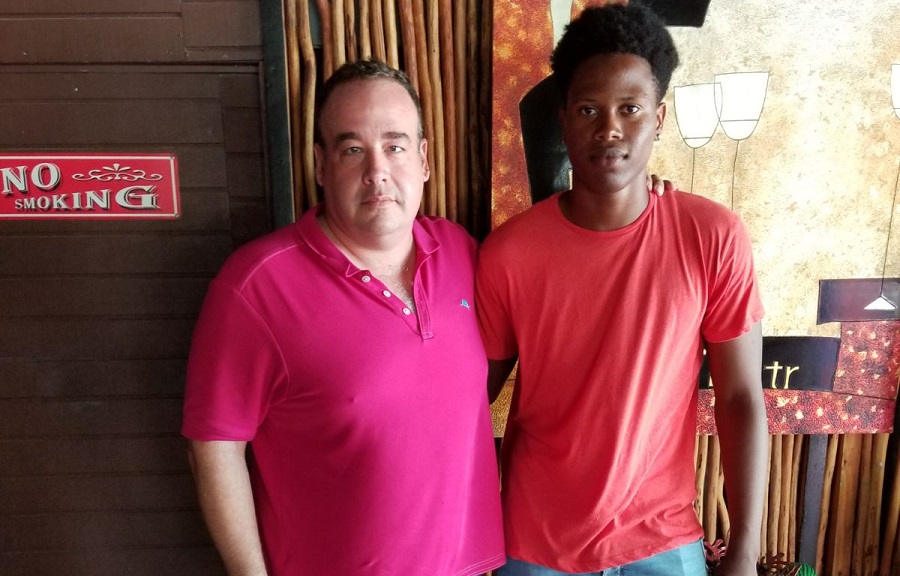 #TurksandCaicos, August 18, 2017 – Providenciales – La’Shano Pierre of Five Cays, Providenciales is doing the kinds of things we want to see more and more young men of this country or of any country doing.   Pierre, at just 17 is investing in and taking responsibility for his personal development through sports and tertiary level education. 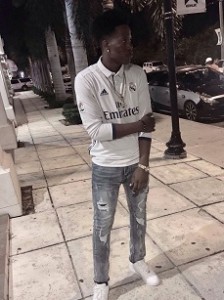 The former member of the Rising Stars basketball club and first year student at Manchester College in the UK, where he is studying Business Management,  is a stand out athlete and earned high grades and was therefore shocked when he was not among the 2017 Government scholarship winners.    Perplexed and gravely distressed, young #La’ShanoPierre was like Nehemiah of the Bible who appeared so downcast that the king was forced to ask his usually diligent server, what was wrong.

Mike Stolow, owner and manager at Bugaloo’s Conch Crawl in Five Cays, similarly noticed the depressed demeanor of Pierre and he too asked his noble employee, what was wrong.   The discouraging news moved Mr. Stolow in a way that moved mountains for young La’Shano and what just moments before had seemed an insurmountable obstacle was erased by a caring heart, a kind question and a benevolent gift.

“The owner always encouraged me to keep my head up and push forward to achieve my goals.   As we approached the beginning of the school year, I was certain that I would be selected to return to England, since my grades were very high.   However, I received the list of students chosen, and my name was not on it.   Needless to say, I was so despondent and it showed on my face when I arrived at work.   That’s when the owner pulled me aside and told me that Bugaloo’s would cover the cost of my next academic year.   He said he was proud of my academic achievements and my work ethics at #Bugaloo’s and I deserved to go.   This uplifted me in a way I will always remember,” said La’Shano, who had worked at the restaurant over his summer breaks.

In a heartfelt story to #MagneticMedia, the young man sets the stage.    Pierre was born and raised in Five Cays and like so many others of his generation and community, loves the sport of basketball.

Bugaloo’s was already an appreciated entity because it supported youth programs and sports development.

“From a very young age my friends and I could always count on Bugaloo’s support and sponsorship at various basketball tournaments locally and abroad.   When I was unable to go to the YBOA basketball nationals, because of a lack of funds, Bugaloo’s stepped forward and sponsored me.   Throughout the years they have always kept in touch with us to make sure we were heading along the right path.    When I came home from studying abroad for the summer, they offered me a job so I could save money for my upcoming school year.” 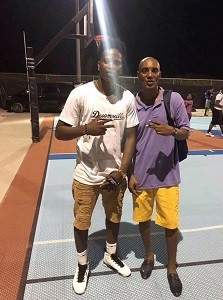 It turns out that this amazing report from La’shano was more than a story of a student who got a scholarship from a kind company, but a beacon of an example of how corporate TCI can be and has been actively involved in cultivating fine citizens by ensuring they are there to pick them up, even when they are let down.

“Throughout my time at Bugaloos one of the things I valued the most was the positive mentoring sessions on life and business management, which really enhanced my knowledge helping me to reach my goal of becoming a future entrepreneur. I went from despair to joy because someone believed in a young man from Five Cays. I hope to be a role model for all the young men of Five Cays who are so often forgotten.”

When the king helped Nehemiah, who was downcast and broken to fulfill his dream of leading the men of his nation in the rebuilding the wall of Israel, which was the heritage of their forefathers, it lead to a rebuilt people pulled from degradation and shame.

Mike Stolow may not be a royalty as modern times would define it, but his king sized heart and his king sized gift to a young man on a mission to build his life as an example of what is possible, even out of Five Cays, is as regal and resplendent as it gets.

“First of all, I would like to Thank God for his blessings upon my life, also I would like to thank my Family and friends and every member of the community for their support. The opportunity that Bugaloos has brought before me goes to show that no matter who you are once you are focused and determined opportunities will come your way.”

La’Shano Pierre of Five Cays was sad because he had gotten some terrible news; but he cleaned himself up and mustered the courage to face the day.  Young La’Shano went to work, and through his grit, earned much more than a day’s pay, he earned the respect of this journalist, our organization and even more significantly at the time… the admiration of his mentor, employer and sponsor: #MichaelStolow who gave the kind of gift only a king could give.

“I would once again like to thank the owner and the team at Bugaloos as well as the members of my community. Thank you for your support and the opportunity you have given me. I assure you that I won’t disappoint.”

And as we pray for La’Shano, a budding Business Manager, to continue to do well at university in the United Kingdom, we are certain that just as he has promised, he will not disappoint.