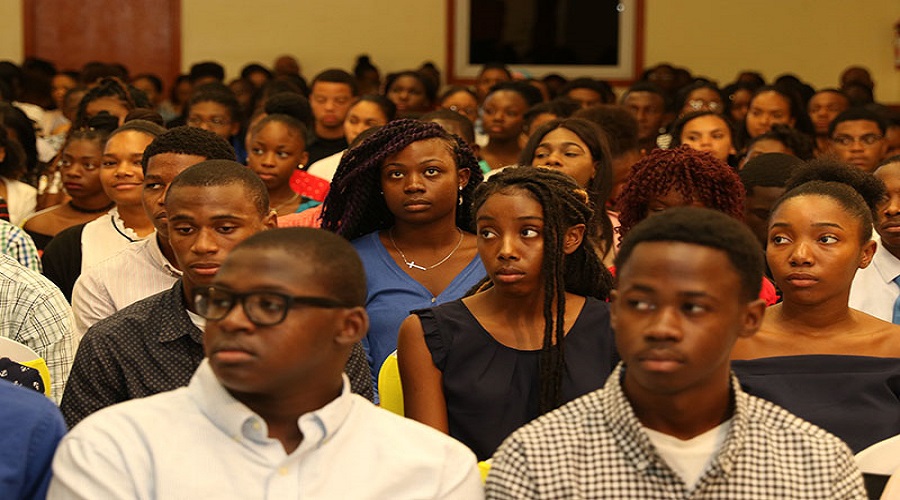 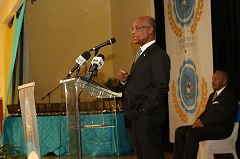 #Bahamas, August 18, 2017 – Nassau –  “Your country has invested in you.  You now invest in your country,” Minister of Education the Hon. Jeffrey Lloyd told nearly 400 scholarship winners of the National Bursary Scholarship to the University of The Bahamas (UB) at a ceremony on Wednesday, evening, August 16, 2017 at St. Joseph’s Church Hall, Boyd Road.

The National Bursary Scholarship to the University of The Bahamas is awarded for receiving either five or more Bahamas General Certificates of Secondary Education (BGCSE) inclusive of Mathematics and English Language, or maintaining a grade point average (GPA) of 3.0 or higher for a minimum of one year at UB. 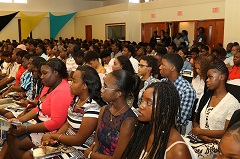 Among them, 288 Scholars received the National Bursary Award which covers tuition and fees up to a maximum of $2,500, and 101 scholars received a limited scholarship in the amount of $1,875 per semester for one year.    A total of 27 high school seniors who had taken BGCSE’s in grade 10 and 11 and had obtained the necessary passes also prequalified.   To maintain the scholarship, students must achieve a minimum GPA of 3.0 to be eligible to keep the award.

The Minister indicated that the Ministry of Education has afforded over 1,000 grants and scholarships to students this year of which 60 percent was afforded to students from government schools.

An atmosphere of immense gratitude was created when 2017 Bursary Scholar from St. Augustine’s College, Ariel Kirlew humbly expressed, “I may not be as rich as my friends, classmates, or neighbors but I do believe that I deserve the same opportunities….  I am truly grateful for this Bursary Award.”    She will be pursuing a Bachelor’s in Accounting.

A 2017 Outstanding Bursary Scholar from Nassau Christian Academy, Christina Small also expressed how necessary the Bursary Scholarship is to her, saying “The word scholarship was slipped into almost every conversation involving college.”   She will be pursuing a career in Medicine.   Both scholars thanked the Ministry of Education and their parents for such great support and the opportunity afforded for their hard work.

Representing the parents, who were also very grateful for the assistance of the Bursary Scholarship, Cedric Moss, father of Bursary Scholar Abigail Moss, thanked the Ministry of Education and UB for their “wise investment” and reminded the scholars that “It is easy to fall behind but hard to catch up” in regards to maintaining their scholarships.

Dr. Rodney Smith, President of UB, contributed many wise words of encouragement to the audience.   He connected with the “First Fall class admitted to UB” in letting them know he was also a recipient of the Bursary Scholarship.   His father had passed away when he was six years old and he was raised by a single mother of four who worked as a waitress to support them all.   The scholarship allowed him to be the first in his family to attend college and allowed him to become what he is today.   He said this to show the scholars how important it is to “work hard because you don’t know what you are destined to be… you are the future builders and owners of the UB.”

The President also gave wonderful insight into what UB has to offer in its upcoming semester, such as new 2-5 bedroom suites along University Commons in Nassau and Grand Bahama, along with many other improvements that he hopes will make UB “the most beautiful campus in the entire world.”   This concept is especially significant because UB is said to be “the only university that considers the entire country to be its campus.”

The University is also working on study abroad programs so that “By the end of their Junior year, all students will be afforded the opportunity to study abroad.”   He also announced his “Thursday open-door policy from 3-5 p.m. for both students and parents.”