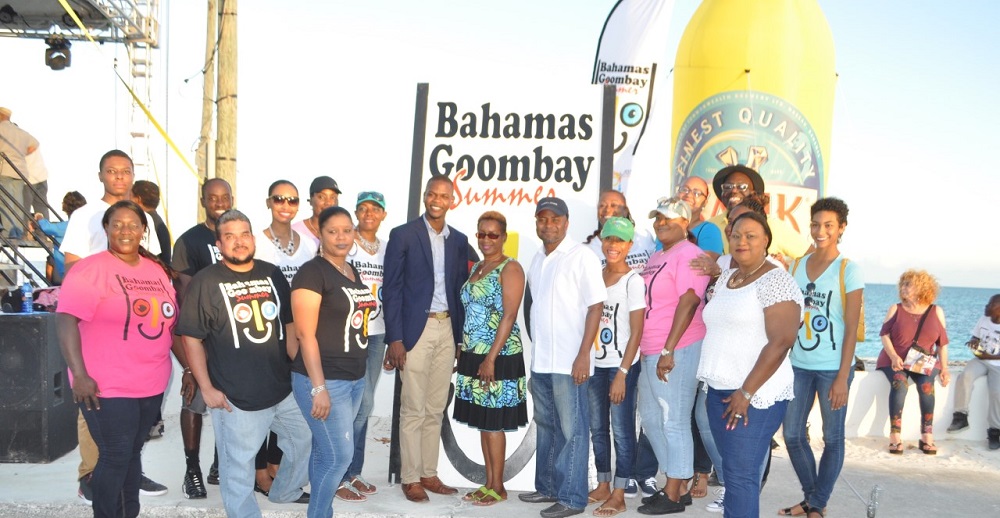 Bahamas, July 7, 2017 – Grand Bahama – Grand Bahamians will play an important role in revitalizing the island of Grand Bahama, according to Minister of State for Grand Bahama in the Office of The Prime Minister, Senator Kwasi Thompson.

“Recovery is a group effort; it takes all of us as a community to see a better, brighter island,” said Senator Thompson. “Truly, one of the most impactful efforts toward revitalization is working together as one.”

The Minister’s remarks came during the short opening ceremony to kick off this year’s GOOMBAY Festival, which was held at Taino Beach on Thursday, July 6, 2017. The Summer Cultural Festival is expected to run until the end of August, and will be held every Thursday evening at the popular beach.

During the opening ceremony, scores of tourists and locals alike flocked to Taino Beach to enjoy Bahamian culture, including food, drinks, Bahamian music and a junkanoo rush out.

“Grand Bahama has shown great resilience in times of hardship and has always had limitless potential for a successful, sustainable, booming economy,” Senator Thompson told those gathered for the Summer Festival.

“We are now moving toward unveiling that potential and making way for this island to be all that it can be.

“As such, I urge residents of this island to support local festivals like these; support cultural activities and support Bahamian businesses, because ultimately, Grand Bahamians will play an important role in revitalizing Grand Bahama.”

Minister Thompson noted that the government is actively working on the redevelopment of the Lucayan strip. He admitted that the once popular shopping district has faced a number of challenges, particularly for local businesses within the tourism industry.

“We want to assure those business owners, particularly vendors in Port Lucaya Marketplace that we stand behind you,” said Minister Thompson. “We are committed to restoring life to Port Lucaya.” 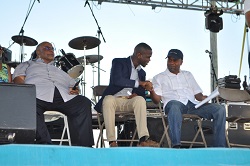 “And for our visitors, if you haven’t already done so, please visit Port Lucaya Marketplace. It is our hope and full intent, in conjunction with the Ministries of Tourism and Culture to bring festivals like this to Port Lucaya and throughout our island, thereby creating an avenue for local businesses to thrive and flourish.

“As we progress toward revitalization, I strongly encourage the public to participate in these activities.”

Minister Thompson commended the team at the Ministry of Tourism for their dedication and hard work in bringing the “awesome” summer festival to Grand Bahama once again. He also thanked the sponsors, as well as the vendors and entertainers who made the decision to be a part of this year’s GOOMBAY Festival.

SUMMER FESTIVAL 2017 – Minister of State for Grand Bahama in the Office of The Prime Minister, Senator Kwasi Thompson (centre, with hat), is joined by Member of Parliament for Bains and Grants Town and Parliamentary Secretary in the Ministry of Tourism, Travis Robinson, Betty Bethel, Director of Tourism (Northern Bahamas) and Ministry of Tourism organizers of this year’s festival, for a group shot during opening ceremonies for the 2017 GOOMBAY Summer Festival on Taino Beach, Thursday, July 6, 2017.

OPENING FESTIVAL – Minister of State for Grand Bahama in the Office of The Prime Minister, Senator Kwasi Thompson was the guest speaker at the opening of the 2017 Bahamas GOOMBAY Summer Festival, which was held on Taino Beach, Thursday, July 6, 2017.

GREAT SPEECH – Parliamentary Secretary in the Ministry of Tourism and Member of Parliament for Bains & Grant’s Town, Travis Robinson (left) is congratulated by Minister of State for Grand Bahama, Senator Kwasi Thompson, for a great speech during the opening of the 2017 Bahamas GOOMBAY Summer Festival.