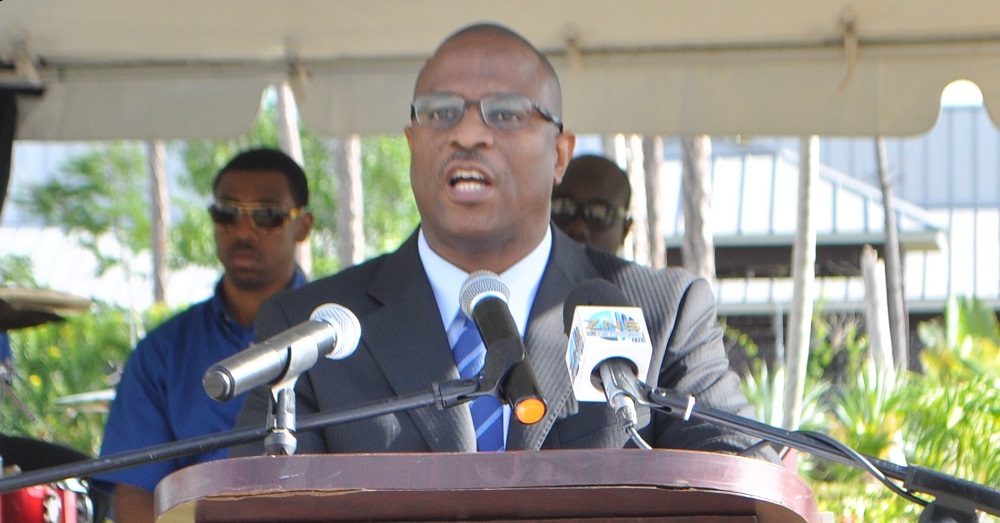 Bahamas, July 7, 2017 – Grand Bahama – As the country celebrates its 44th Independence on July 10 some of the best and brightest Bahamians have made contributions in many spheres internationally, said Minister of Youth, Sports and Culture, the Hon. Michael Pintard during the Flag Raising Ceremony on Friday. 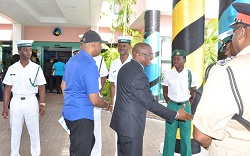 The ceremony is part of the 44th Anniversary of Independence celebrations.  “Our small national has become the envy, not just of the region but countries around the world who have understudied what we have done in tourism and in financial services. Even in crisis, we continue to prove we are resilient and powerful. In the aftermath of the blacklisting, we produce a cadre of compliance officers who designed one of the sophisticated compliance regimes that assisted this region in getting back on track.

“Therefore, this morning as we raise our flag, we salute all those nation builders on whose shoulders we stand, some with title and many with no name or face recognition but, nevertheless, they played a pivotal role in transforming life as we know it in The Bahamas. So, we salute them. We also acknowledge that there are many unrealized dreams that we have set, and there are some stubborn issues that threaten the gains that we have made thus far. This Minnis led government believes that the collective will and genius of the Bahamian people will enable us to grow our economy once again; reduce the high incidences of crime and the high occurrences of non-communicable and other diseases. We are determined to forge deeper relationships with all Bahamians, regardless of their political persuasion, religious differences, differences in race. All of us have to be on the same page if we are to transform this country for the better.”

Minister Pintard saluted all those who had the insight and courage 44 years ago who felt it was time for the country to govern its own affairs and sit at international tables as equals.

“The pursuit and achievement of Independence on the 10th of July, 1973, was an acknowledgement that we ought to be the main agents, the main architects designing our own future and managing the growth and development of our own country. We accepted the challenge undergirded by our faith in God and the confidence in our collective ability as a people.

“Over the last four decades plus, despite all of our challenges, we’ve accomplished I believe you would agree with me this morning, a great deal as a people. In the international sphere, our voice factored loudly. When we engaged as a global community in the discussion of disarmament, there was a Bahamian chairing many of those sessions, Dr. Davidson Hepburn. In international diplomacy our own Missouri Sherman-Peters impacted the significant work done by the United Nations, and our first Prime Minister, Sir Lynden Oscar Pindling’s voice resonated internationally as we dismantled as a global community Apartheid’s wall and rebuilt in its place, a multiracial South Africa that even today is working to forge a lasting peace.”

The country has made contributions all over the world, he said. “In academics, we continue to produce multiple Rhode’s scholars, scientists that are impacting the world both in technology, just ask NASA and in medicine as we travel throughout particularly Africa assisting on many levels. We have set a standard. Many of our scholars have sat international standardized exams and performed as well, and often better, than their colleagues who hail from around the globe.

“We are good as anyone else, anywhere else in the world.

He added, “This morning, we salute all of you who continue to engage in this nation building exercise. Bahamians, those that have chosen to cast their lot with us and have moved to The Bahamas. Diplomats who have worked with us on an ongoing basis, we look forward to working with you to frame a democracy that will be envied.

“This year’s theme, “One God, One People, One Bahamas” is a most appropriate reminder of the core values that have held us together since Independence.”

Also present for the flag raising ceremony, held at the Harold Degregory Complex were: Senator the Hon. Dion Foulkes, Minister of Labour; Senator the Hon. J. Kwasi Thompson, Minister of State for Grand Bahama in the Office of the Prime Minister along with other Members of Parliament, senior government officials and religious leaders.

While the ceremony was taking place in Freeport, Senate president, the Hon. Kay Forbes-Smith was present with Deputy Prime Minister and Minister of Finance, the Hon. K. Peter Turnquest in East Grand Bahama. Parliamentary Secretary in the Ministry of Public Works, the Hon. Iram Lewis and Parliamentary Secretary of Information and Communications in the Office of the Prime Minister, the Hon. Pakesha Parker-Edgecombe were in West Grand Bahama. All three areas held Flag Raising Ceremonies simultaneously. 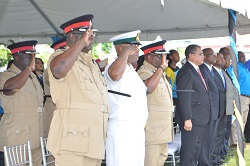 SALUTE TO THE FLAG – Senior government officials and officers of the Royal Bahamas Police Force and Defence Force, are seen during the Flag Raising Ceremony of the 44th Anniversary of Independence ceremony on Friday at the Harold Degregory Complex. Shown in the front row from left are: Assistant Commissioner of Police, Clarence Reckley; Andrew Bowe, Senior Lt./Executive Officer of the Royal Bahamas Defence Force and OC of Grand Bahama; and Deputy Commission of Police and OC of Grand Bahama, Emrick Seymour; Senator the Hon. Dion Foulkes, Minister of Labour; the Hon. Michael Pintard, Minister of Youth, Sports and Culture; Senator the Hon. J. Kwasi Thompson, Minister of State

for Grand Bahama in the Office of the Prime Minister and Rev. Peter Pinder, president, Grand Bahama Christian Council.