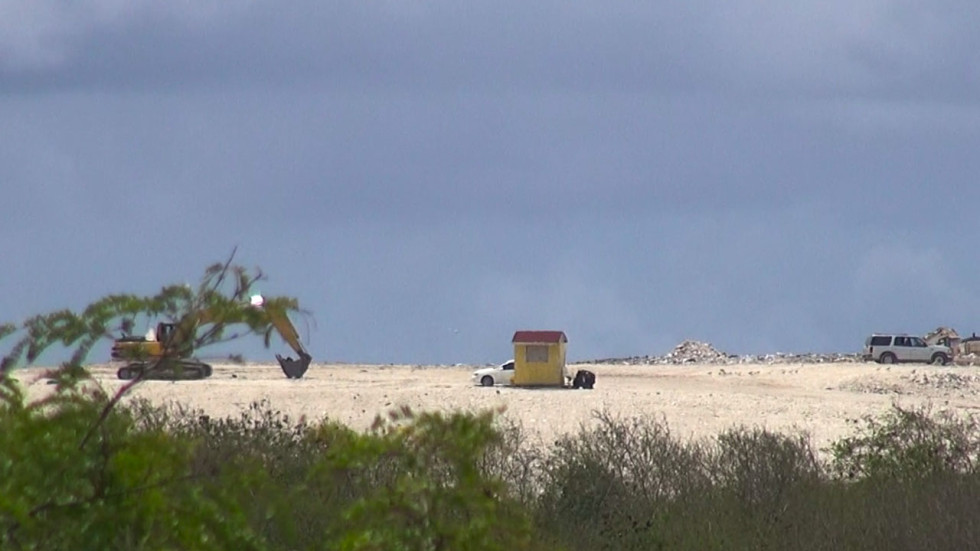 Turks and Caicos, July 13th 2017: TCEM said a mechanical failure hampered their efforts to more quickly extinguish a vexing fire which broke out at the Provo Landfill over a week ago now.

In a statement released Thursday, Timothy Hodge, President of Turks and Caicos Environment Management explained that over 80,000 gallons of water and eighty plus loads of quarry have been applied to the burning waste at the dump site.   Hodge in a media release explained the process landfill operators take in fighting fires at the dump, which includes a combination of squelching flames, soaking waste mass and constructing physical barriers to isolate burning waste.

The company’s president adds that water trucks, an excavator, bulldozer and dump trucks have all been operational at 14 hour shifts.

Hodge says TCEM is working to do more to stave off future fires as requested by the TCI Department of Environmental Health, and that includes arrangements for more redundancy of equipment, an increase in curry and water supply.

The assurances come after media reports about residents being frustrated by the unhealthy conditions in northwest Provo, created by the latest fire. Hundreds of homes in the Wheeland District, which includes Belglade Parker Gardens, were covered in plumes of noxious smoke earlier this week, forcing residents to seal air spaces around their home with towels, and keep their pets inside.  The residents took matters into their own hands, reaching out to local media, posting concerns to social media and visiting the landfill to meet with management to see for themselves what was being done to quell the fires.

As to what caused the fire, the exact reason remains unknown; it is believed to be accidental.

The residents were told that the Standard Operating Plan for managing fires included firefighting equipment and the use of mostly water for combating flames.   Operators say security checks are done several times a day.   Phase two plans were also rolled out for the visiting residents, including recycling, composting and how TCEM will soon service all Turks and Caicos Islands with garbage collection.

Residents reported to Magnetic Media that they feel assured after the visit and say they now better understand the operations at the landfill.

Still, the fire is not yet out, TCEM shared in their press release that, “The fire is controlled, and while certain areas remain hot and have continued to produce smoke, the threat to health and safety is being contained to every possible extent.”