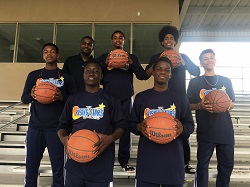 Turks and Caicos, July 6, 2017 – Providenciales – A team of basketball players from the TCI Rising Stars Basketball Club is preparing to compete in an international basketball tournament on July 18th – 22nd 2017 in Puerto Rico. The  tournament is expected to attract teams from countries such as Costa Rica, Dominican Republic and Mexico.

InterHealth Canada is a key sponsor of the team from the Turks and Caicos Islands, which will consist of fourteen young male athletes from Grand Turk and Providenciales. The corporate arm of the healthcare management company provided financial aid and purchased the team uniforms.

During a media briefing on Wednesday, July 5th 2017 at the Downtown Ballpark in Providenciales, Public Relations and Marketing Manager for InterHealth Canada TCI, Nikira John said the donation reflects the company’s commitment towards health promotion and encouraging youth, especially young men, to stay physically active and productively engaged. Secretary of the TCI Basketball Federation, Trevor Cooke also participated in the media briefing to offer best wishes to the team during their final two weeks of practice.

President and Vice-President of the Rising Stars Basketball Club, Marvin and Jarrett Forbes intend to utilise the opportunity to promote their older athletes on an international scale with hopes of receiving a college scholarship. 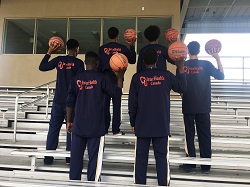 The TCI Rising Stars Basketball Club has managed to seize unique overseas opportunities for its basketball stars in the past. Dwaine Simmons, a young athlete of Grand Turk most recently secured a college basketball scholarship with Dakota College in the United States.

The club was established in the Turks and Caicos Islands in 2012 with a mission to empower today’s youth and teach young basketball players to have respect for themselves, their peers, and their community by instilling a code of ethics built on honesty, responsibility and team work.