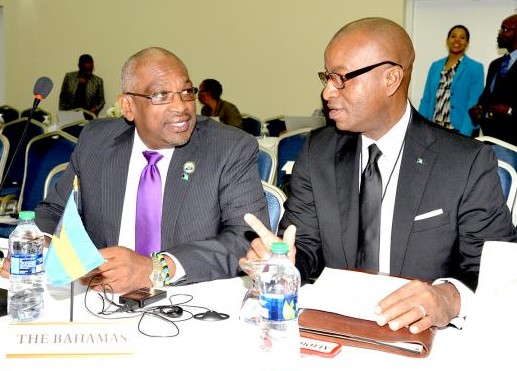 Bahamas, July 11th 2017: Foreign Affairs Minister Darren Henfield is calling for a collective effort in regional security. The minister in making his CARICOM debut at the 38th Regular Meeting of the Conference of CARICOM Heads of Government told his regional counterparts more dialogue is needed as a region on establishing a fully functioning regional security strategy.

Using The Bahamas as an example, that shares borders Cuba, the Dominican Republic, the Turks and Caicos and the United States, he says it is  only through collaboration are we able to keep our country safe.

The minister who is a former Naval Officer with the Royal Bahamas Defence Force, highlighted Exercise TRADEWINDS as an example of what regional cooperation on security and other matters can accomplish.

Minister Henfield says,TRADEWINDS can be used in the region to “create synergy and inter-operability between our forces, not only to protect ourselves from a defensive perspective but also from natural disasters such as hurricanes.”

Henfield who retired as a Lieutenant Commander of the Royal Bahamas Defence adds that this can work at an operational level and called for it to be put into policy and strategy at Cabinet level.