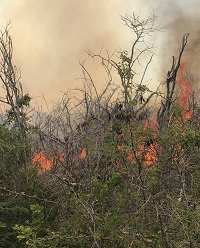 Bahamas, June 12, 2017 – Long Island – A delay in fire-fighting resources for Hamilton’s Long Island is believed to have helped that raging fire there which got dangerously close to homes on the island.   The Member of Parliament for Long Island, Adrian Gibson was talking to media and said his constituency has no fire truck despite fires being fairly common.  Gibson promised to lobby hard for the island to have fire-fighting equipment.