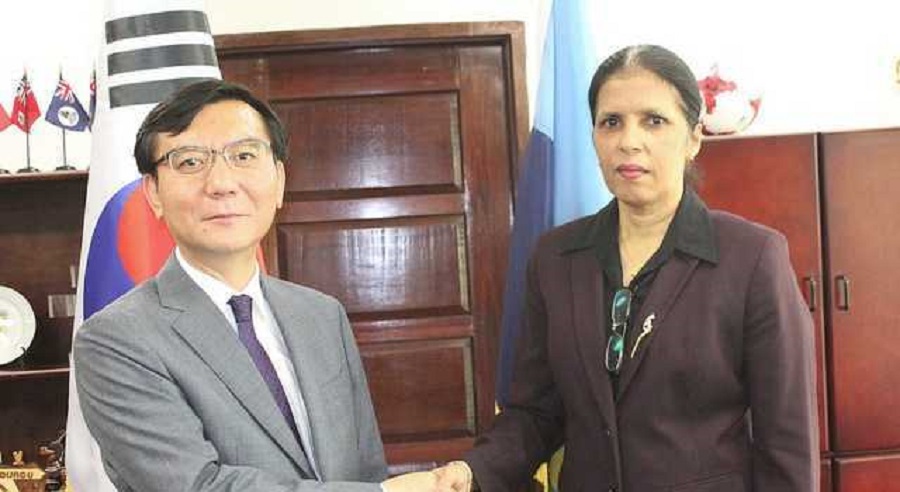 Guyana, June 15, 2017 – Turkeyen, Greater Georgetown – The Caribbean Community (CARICOM) and the Republic of Korea earlier today formalized a decade-old friendship with the accreditation of the first non-permanent Plenipotentiary Representative of the East Asian country to CARICOM.

Deputy Secretary-General of CARICOM, Ambassador Manorma Soeknandan accepted the Letter of Credence from H.E. Mr. Ki-Mo Lim in a simple ceremony at the Headquarters of the CARICOM Secretariat on Tuesday 13 June, 2017.

She said CARICOM welcomed and celebrated this formal step towards a more institutionalized partnership and enduring relationship with Korea.

Underscoring the value of longstanding relations at a time when the international community was increasingly uncertain and unpredictable, she said CARICOM looked to like-minded countries, like Korea, and to multilateral, regional and international organizations for support in protecting its interests.

In this context, she said CARICOM faced considerable challenges in accessing concessional financing due to graduation as a result of the use of per-capita income as the sole criteria for measuring development.
Noting that the increasing vulnerability to climate events remained the single biggest threat to Small Island and Low-Lying Coastal Developing States (SIDs) like those of CARICOM, the Deputy Secretary-General told Mr Lim that the Community was heartened by South Korea’s recent affirmation of its continued commitment to addressing the threat of climate change and its continued support for the Paris Climate Change Agreement.

Given that the Region was the most prone to natural disasters and for the Community, climate change was an existential threat, the Paris Agreement she stated “encompassed the hope of our generations for an enduring existence.”

CARICOM and Korea held their first Consultation and Cooperation Mechanism Meeting, in January 2007. Over the last ten 10 years, the friendship has deepened through the High-Level Caribbean Partnership Forums held annually in Korea. Earlier this year, the inaugural CARICOM-Korea High-Level Meeting was held in Montego Bay, Jamaica.

These meetings, the Deputy Secretary-General noted, facilitated the exchange of views on strategic cooperation in various fields, including climate change, the 2030 Development Agenda, energy and food security, ICT and E-Government, health, and education. They have also facilitated people-to-people contact and increased bilateral technical and political cooperation.

As she congratulated Korea on the recent election of President Moon Jae-in, Ambassador Soeknandan said the Community looked forward to working with the East Asian country in implementing the commitments undertaken in the Joint Statement of the Inaugural CARICOM-Korea High-Level Meeting.  “We thank the Government of the Republic of Korea for its support and we extend our support for peace on the Korean peninsula,” she stated.
For his part, Mr Lim said he anticipated Korea’s partnership with CARICOM would continue to grow stronger and that the accreditation would mark another turning point in the evolution of the “excellent friendship.”

Describing the Montego Bay CARICOM-Korea High-Level Meeting as a “milestone in elevating the level of dialogue and strengthening tangible cooperation between the two sides,” he added that the Joint Statement, unanimously adopted, signaled the strong will and commitment of both sides to fortify the bonds between the two Regions.
He described CARICOM as a leading group in the international community’s efforts regarding climate change and sustainable development goals and a model example of regional cooperation and integration.