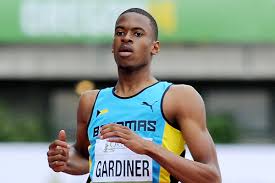 Qatar, May 9th 2017 : Steven Gardiner won the 400 meters, when he kicked off the IAAF Diamond League on Friday at the Doha 2017 meet in Qatar. Coming in at 44.60 seconds, Gardiner took the lead over Donald Thomas and Americans, LaShawn Merritt and Tony McQuay.  The win comes two weeks after his historic win at the IAAF Relays in Nassau, and a few seconds short of his personal best at 44.26 seconds he recorded in the Grenada Invitational in April.

Grenada’s Kirani James, the 2011 world champion and 2012 Olympic gold medallist, was also scheduled to compete in the meet but withdrew.