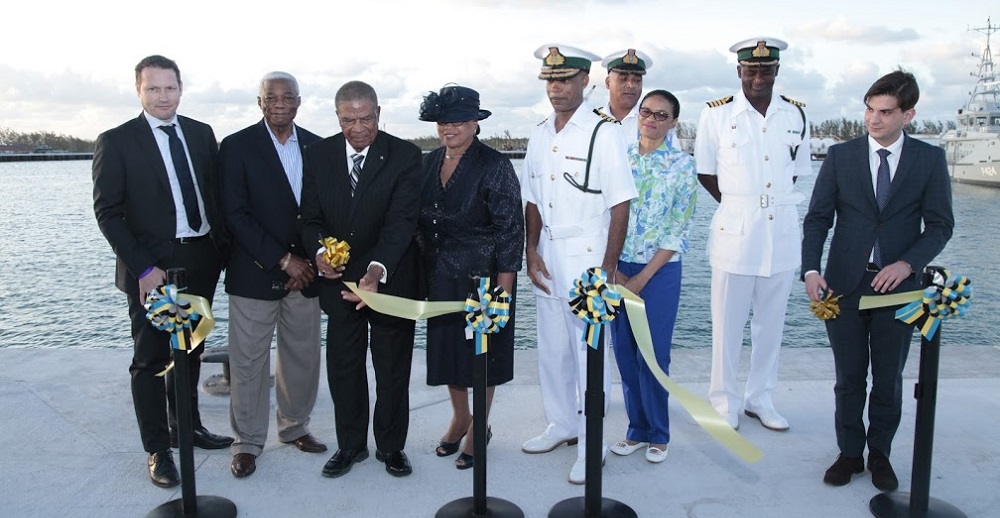 Bahamas, April 25, 2017 – Nassau –  Members of the Royal Bahamas Defence Force (RBDF) celebrated in grand style yesterday evening, as a huge milestone was completed within the multi-million dollar Sandy Bottom Project Agreement.  Signed in 2014, the agreement between the government of The Bahamas, VAN Oord and Damen allocated funds not only for the provision of 9 new state of the art patrol and auxiliary craft but also for the improvement and creation of adequate jetties, docks and breakwaters that could house the existing and recently acquired craft for the Royal Bahamas Defence Force in Coral Harbour, Ragged Island and Inagua.   The signing of the agreement ushered the Defence Force into a new era. Since then, work has been progressing very steadily and last night’s ceremony signified the ending of the project’s second phase. 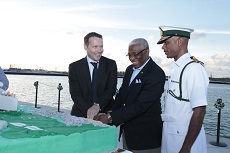 Welcoming remarks were orated by the Captain Tellis Bethel, Commander Defence Force (Acting) and host of the event, who told the history of the Coral Harbour Base, dating back to 1965, highlighting comparisons of today’s fleet and port facilities to yesteryears’.

Reverend Prince Bodie, Chaplain of the Royal Bahamas Defence Force offered a prayer of dedication.  Mr. Mark Roelofs, brought remarks, outlining the sustainable nature of the project, its environmentally friendly components and the local economic stimulation it brought to the community of Nassau, employing over 465 local staff.

Bringing principal remarks was the Minister of National Security who spoke of the vision of Sir Lynden Pindling which was first made public in 1975.  He revealed that it was the intent of his government to continue to ensure the Defence Force was properly outfitted and equipped to continue ‘guarding our heritage’.

The final phase of the Sandy Bottom Project has already begun and will see the completion of warehouses, ramps, an operations center, workshops, ware house facilities, as well as continuation of increase in Force strength.

The soft launch cake and ribbons were cut by the specially invited guests followed by a gun salute by the 105 mm howitzer.  Guests were treated to a reception that culminated with a live music by the Ira Storr and the Spank Band and a fireworks display.