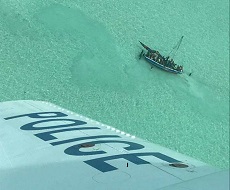 Turks and Caicos, April 11, 2017 – Providenciales – Two children were on that illegal boat from Haiti, which was brought into Providenciales on Friday night after being spotted by South Caicos fishermen in waters of North and Middle Caicos.  Border Control Minister, Sean Astwood yesterday updated that there were 59 adult males, 6 females and two boys on the boat – 67 in all – and all are being sent back home to Haiti.

The Minister thanked those who worked the situation and issued a warning to the public on the Government’s zero tolerance for human trafficking; a fine of $20,000 and jail time is on the TCI law books.