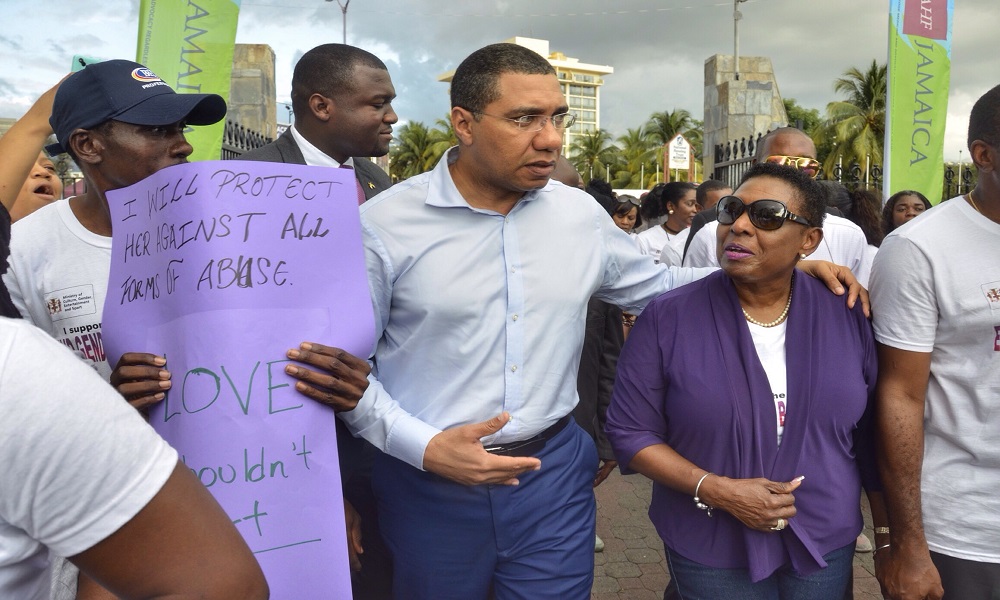 Jamaica, March 14, 2017 – Kingston – Churches were invited to dedicate their services on Sunday, March 12 to celebrating women, in support of the Government’s renewed thrust to eliminate gender-based violence.

The call came from Culture, Gender, Entertainment and Sport Minister, Hon. Olivia Grange, as she led an advocacy march in New Kingston on Wednesday, March 8, which was commemorated as International Women’s Day under the theme: ‘Unite to End Gender-based Violence’.  “We are encouraging churches all across Jamaica to host their women and to carry the message that we want to end gender-based violence. Sunday will be a day of prayer when we celebrate all that is good about our women,” the Minister said.

Wednesday’s march, which took participants from Emancipation Park in New Kingston along Trafalgar Road and back, was part of activities held over five days to mark International Women’s Day.  The participants carried placards displaying various messages addressing the issue of gender-based violence.

Prime Minister, the Most Hon. Andrew Holness, was among the scores of concerned Jamaicans which participated in the event.  Prior to the march, he hosted a group of the society’s women leaders at a luncheon at Jamaica House.

France’s Ambassador to Jamaica, His Excellency Jean-Michel Despax, who said he did so to show his country’s support for the rights of women also participated in the event.  “I think it is important for us to show Jamaica that we are all on board and that it is not only an issue in Jamaica, but also in France and Europe. We have to show that we share common values and we want to fight for the rights of women, wherever they are,” he said.

Ms. Grange told JIS News that the march was a way of “demonstrating our commitment…that we are united in our fight to end gender-based violence against our women, our boys and our girls”.  The day culminated with a free concert at Emancipation Park featuring several of Jamaica’s popular performing artistes.   They included: Marcia Griffiths, Tony Rebel, Queen Ifrica, Tarrus Riley and Judy Mowatt.