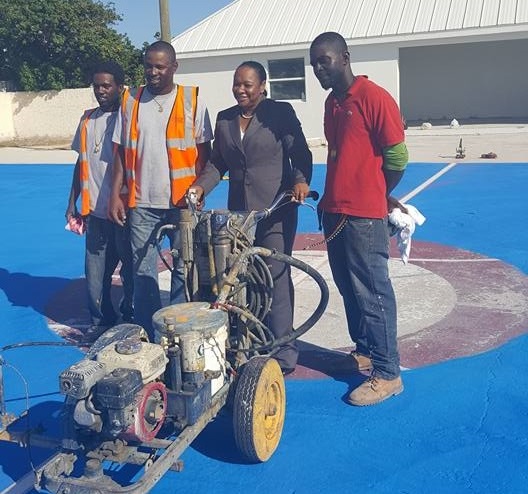 Turks and Caicos, March 23, 2017 – Grand Turk – Bahamas Foreign Affairs Minister, Fred Mitchell was in Turks and Caicos earlier this month and on his agenda was endorsing and supporting Bahamian businessman, Atario Mitchel of Bahamas Striping.

“This is the first international contract that they have had and they wanted some exposure and some support of The Bahamas government.  They are benefactors in my constituency and ask me if I would come down and show my face which I did yesterday.  They’re doing excellent work, and from all accounts, from the ministry personnel and from the contract on the job they’re quite pleased with the performance, so much so that they actually got some extra work while they are here.   So I was pleased to be able to support that and to show the Bahamian flag in that sense.”

Bahamas Striping secured a significant contract in Grand Turk, the capital of the Turks and Caicos and the Minister said Mitchel’s contract has been extended now to Providenciales, the country’s economic hub.

Minister Mitchell in a one on one with Magnetic Media explained that this sort of business potential is one of the key reasons a Bahamas Consulate could and should be established in the Turks and Caicos Islands.