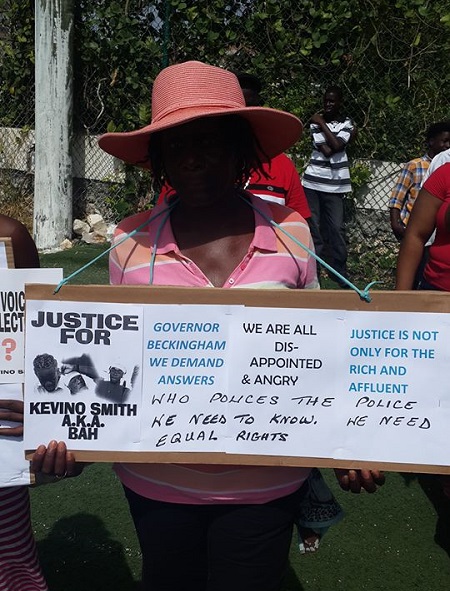 Providenciales, TCI, February 3, 2017 – At around noon today, the three men police believe are responsible for the disappearance and death of 25 year old Kevino ‘Bah’ Smith in 2015 will have their first moment in court. The trio – 24, 25 and 31 years of age – is being prepared now to face formal charges in the case, which grabbed media headlines initially for the mysterious nature of a Grand Turk man missing without a trace and then for the day of discovery, April 16th, when the body of young Bah was found in Breezy Brae, an upscale residential area of the Capital.

Smith was reported missing by his parents on March 4, 2015 and the case took off, they charged with lackluster momentum and that was widely criticized by then PDM Opposition members in the House of Assembly.   Incessant protests, public commentary and galvanizing of leaders led to ACP, Rodney Adams taking over as lead investigator in the case but still the pace seemed to slow to Patty Smith, mother of Kevino and she voiced her view that her son’s death seemed to have been forgotten.

Police today make the most important statement to show that grieving mother, that this is not the case as they have finally brought those arrested and then re-arrested to face the charges of suspicion of murder and perverting the cause of justice.   It had never been confirmed by Police to Magnetic Media, if Smith’s body was found dismembered, but it is widely believed that is exactly the case in this horrifying matter, where no cause of death has ever been revealed.

The arraignment will take place at Court #1, Providenciales.