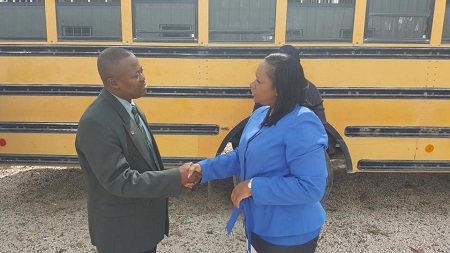 Providenciales, TCI, February 3, 2017 – Illegal Immigration is not just a burning issue in the United States, it is a serious concern for the Turks and Caicos Islands and earlier this week, Premier Sharlene Robinson toured the South Dock Road detention Center.   Images of Premier Robinson are shared on the Office of the Premier Facebook Page, and while there are no comments on her observation of the state of the facility, there is comment on the Administration’s stance when it comes to illegal migrants.

“Whilst this is an age old problem, we cannot relent on our efforts. We MUST do what is absolutely necessary to protect our borders and not be apologetic about it.  The repatriation and Detention costs are unsustainable.  I am grateful to the hardworking Immigration Officers, Police Officers and all other Agencies for their commitment and diligence over the past week.  We must be at war with Human trafficking and whatever else that may be entering via these sloops because it is certainly at war with us”.

Two boats were within hours of each other intercepted this past weekend; nearly all of the Haitians have been sent home at TCI expense.   It was reported to Magnetic Media in 2016 that it costs $6,900 per flight, and there were eight flights arranged for the 178 Haitian migrants.