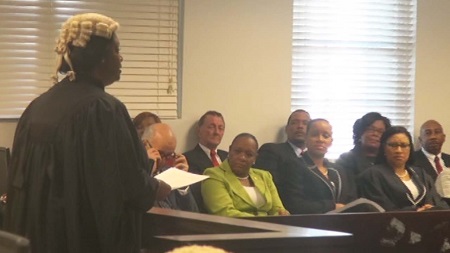 Providenciales, , TCI, January 12, 2017 – The Legal Year Officially opened on Wednesday morning and attending the ceremony held at the Supreme Court Annex was the new Governor, His Excellency Dr John Freeman, new Speaker of the House of Assembly, Hon Dwayne Taylor, new Premier, Hon Sharlene Robinson and members of the House of Assembly including the representative for the Bight, Hon Porsha Smith.

When the Attorney General spoke, there was a thorough acknowledgement of those in attendance and kudos to her team of 15 which worked with the former PNP Administration to see as many as 45 ordinances and policies formed or reformed. 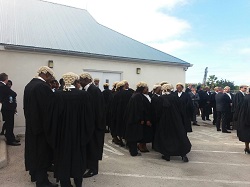 Hon Rhondalee Knowles said among the stand out advancements, the Mental Health Ordinance which had not been changed in some 114 years.

In her congratulations to Hon Sharlene Robinson as Premier, the AG acknowledged her accomplishment as the first woman to achieve the feat.   It was also said the by AG, who is the first woman to hold that post, that Premier Robinson was debriefed on litigation matters and legislative initiatives in a meeting the two have already had.

During her presentation to the Chief Justice and the Supreme Court Justices, AG Knowles reported that the laws of the TCI are also now regularly updated online after being passed in the House of Assembly.   She  also said coming is the activation of a Law Revision Centre which the territory will share with other British Overseas territories like Anguilla, British Virgin Islands and Montserrat.   It will offer training, resources and the first fruit from the joint venture is expected by the end of the first quarter of 2017.