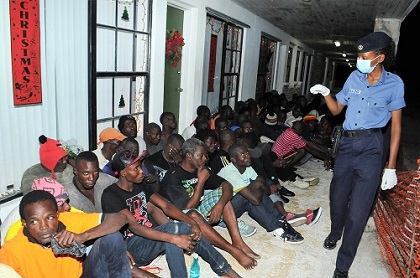 Coral Harbour Base, Bahamas, December 24, 2016 –  A total of 99 Haitian migrants were taken to the Carmichael Road Detention Center after they were apprehended in the central Bahamas by the Royal Bahamas Defence Force Saturday afternoon.

Patrol craft HMBS P- 49, under the command of Acting Sub Lieutenant Owen Sands, apprehended a 40-ft wooden sloop at 3:00 pm approximately 4 miles west of Hawksbill Rock, in the southern Exuma chain.   Defence Force Marines discovered the migrants –77 males and 22 females– onboard the sloop.   They arrived at the Coral Harbour Base early Christmas morning.

The migrants were turned over to Immigration officials upon their arrival for further processing.  The Royal Bahamas Defence Force remains committed to protecting the territorial borders of The Bahamas.