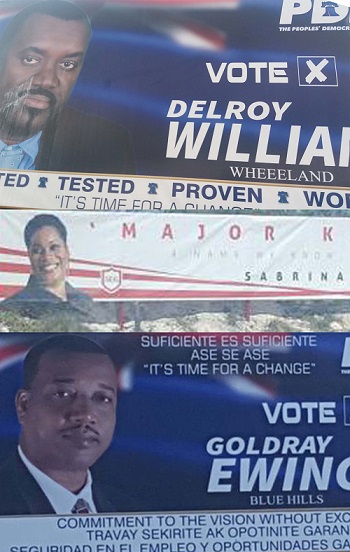 Providenciales, TCI, November 17, 2016 – Nomination Day in the country is tomorrow, the governing PNP is so far quiet to about how they will arrive at the 10 sites with their 15 candidates, when Magnetic Media asked.   We also checked in with the PDA, the new green party which had up to Wednesday said that they did not yet have a full 15 to contest in the General Elections.

While the promotional strategies of the candidates and political parties vary, it is evident that social and mobile media have transformed how messages are getting out to the masses.  From the use of Facebook and Instagram with eye-catching graphics and videos, to plans being rolled out in at a glance images, to use of Google Adwords, online polls and surveys and the basic invites to like and follow and comment.

There are the small road signs, large road signs, tall and short road signs, road signs with a multi-lingual vote for me message, super duper sized billboards and while many things have changed, some things stay exactly the same as at least one act of vandalism is evident on the sign promoting the member for Wheeland from the PDM.

A first of its kind dinner fundraiser is planned this weekend, in the past two days there have been rallies in South Caicos for the PDA and tonight for the PNP; the PDA goes to Grand Turk this evening.  Debates have been broadcast on TV, Radio and Social Media and winners have been declared… the PDM in a news release says it leads in that area.

In any event, the number of candidates is expected to be unprecedented as we count down now, with just hours to go, before Nomination Day which is tomorrow, Friday November 18.   The men and women wanting to offer have from 9am to 1pm and 2pm to 4pm tomorrow – only – to meet the criteria and officially register their names as a contender in the December 15, 2016 elections.