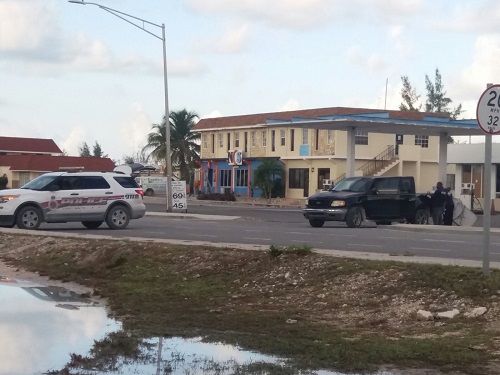 Providenciales, TCI, October 24, 2016 – It was a chain of events that likely led to the most shocking burglary attempt for the TCI; and the suspects who will shoot at police and even shoot and beat up an unarmed, unsuspecting woman remain at large.

Police are still hunting down the three men who tried, early on Sunday morning, to steal the entire automatic banking machine from the MoneyGram location down town.  The fiends not only managed to break into the location, but managed to extricate the ScotiaBank ATM, chain it to a truck which they had stolen by gunpoint on Saturday night from a man in Discovery Bay and then aimed to drag the heavy machine through the streets of Provo in the hopes of breaking it open to take the cash inside.

Magnetic Media saw the crime scene, which forced Police, including their tactical unit to cordon off much of the Blue Hills roundabout area and we saw what was left of the crime.  A black Ford F150 and a huge gray box, apparently chained to the truck when the attempt was said to have been foiled around 4am by patrolling police officers, who were looking for that truck.

When Police approached the suspects, they opened fire – on the police and ran into the Kew Town area. In feeling cornered, they again committed a crime and not only reportedly tried to steal a young woman’s car, but shot her first, kicked her about her body after forcing her to the ground.

Magnetic Media is told the masked men, two this time, were unable to get that vehicle, the woman, who is a popular manager at Graceway IGA could have been killed… thankfully, she was not, the gunshot to the leg is being treated at hospital.  Police are asking for help to catch the men… they were dressed in all black and safe to say, they are armed and extremely dangerous.