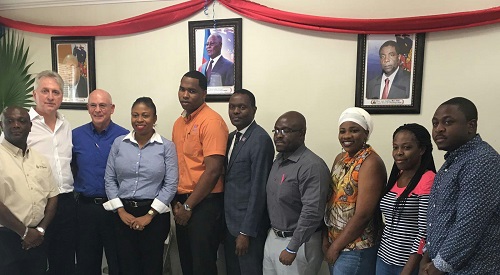 Providenciales, TCI, October 13, 2016 – The TCI Hotel and Tourism Association, InterCaribbean Airways, Graceway Supermarkets alongside residents coordinating Saturday’s Haiti relief fundraiser called o the public to support the upcoming fundraiser and other relief efforts in Turks and Caicos in the wake of the storms devastation in Haiti.

“This is a humanitarian disaster.  Haiti is still reeling from the effects of Hurricane Jeane in 2004, still recovering from the 2010 earthquake and numerous tropical storms that have impacted the country, compounded by the increasing fears of Cholera.”

The groups have galvanized efforts in hopes of reaching persons throughout the community.   Graceway Supermarkets IGA, Smart and Gourmet are asking residents to donate $1 or more to go towards disaster relief in Haiti.  The store has pledged to match up to $10,000.

Tamell Seymour, Store Manager at Smart said, “we understand the situation they are in because we have been there before with Hurricanes and Haitians in this community, they are our people, we hurt when they hurt, we cry when they cry, we always want to step in when we can.”

The relief group will host a fundraiser on Saturday at Sarah’s Kitchen on Airport Road.  Kevin Clarke who is representing the group called for donations of clothing, emergency kits, non-perishable goods, canned food, shoes, baby items and hygienic products.

Meanwhile, TCHTA’s Stacy Cox said the group is encouraging persons to donate through IGA supermarkets.  She said the TCHTA is spreading the word through other travel agents.

Provided by PR for the Haiti Relief Fund

Related Items:intercaribbean airways-tchta-graceway supermarkets all team up with residents to support haiti, team work for help to haiti