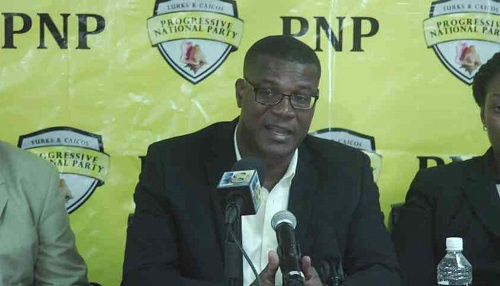 Providenciales, TCI, July 6, 2016 – The Turks and Caicos is not ready to be an independent nation and Premier Rufus Ewing said he will not push these islands toward the step before there is better education and less apprehension on the issue.  “So it’s nothing to take lightly, it’s nothing to just jump to.  Yes we all require some education about independence, and we have to continue to speak about independence without getting nervous about it, but we haven’t been able to do so in this country, because the minute you decide to speak about independence, there’s some fear mongers who make people believe that you are going to go independent tomorrow, and that a government can push you to independence and push it down your throat.  No government can make this country independent without you the people.”

Premier Ewing was speaking at the press conference held by the PNP on Monday at the Opus conference room and taking on an issue former premier Michael Misick says is a matter of urgency; Misick chided the current PNP for not moving more swiftly toward independence for the country.  The decision of 52% of British voters to eventually end the UK’s place in the European Union last month brought new comments from Misick who said the Governor and the Premier should at least hold a referendum on the matter of independence.

While the Governor on National Heroes Day said both he and the FCO want to see a referendum held on Independence in the Turks and Caicos, when Magnetic Media asked the Premier if he is ready to hold that referendum, there was this point blank response.  “No i’m not prepared to run a referendum.”

The Progressive National Party will next week begin the candidate selection process but even securing the most support at that level where party members vote will not mean automatic candidacy on the PNP ticket.  Party Chairman, Royal Robinson explained that two thirds of the vote must be had and where that is not accomplished in the district and all island candidate categories, there will be some executive meetings within the party to determine the final five for the districts and the final three for the at large.

“If that doesn’t happen on the first round, then there will be a second round of voting.  If there’s still no person coming out with the two-thirds majority at the second round, then the two persons that have the top amount of votes will then be sent to the NEC of the Progressive National Party for a recommendation and decision that will go to the National General Council or a special convention.”

There are nine vying for the at large spots including current MPs, Norman Saunders and Donhue Gardiner and races for South Caicos, North Caicos, Grand Turk North and two seats for Provo.  The PNP Primaries span all of next week.