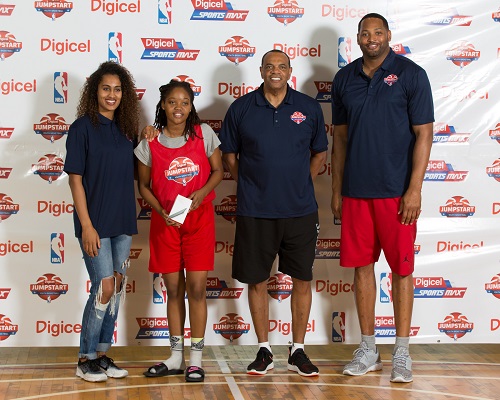 Shernaria Morris and Wilkins Sylvins were all smiles when their names were called to receive their awards. Wilkins become one of eight boys selected to move on to the NBA New York Experience; while Shernaria received the female sportsmanship award for her remarkable ability to encourage and help her fellow teammates. 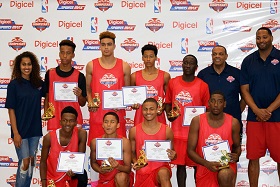 “I’m way up on top of the world right now. It feels great to be selected as one of the top eight boys. I’m looking forward to going to New York, learning more and challenging myself as a player,” remarked Wilkins.

Shernaria explained that: “Basketball is a team sport and the team can’t win if we’re not all trying to help each other. I didn’t get selected to go to New York, but it’s still good to know that the coaches recognize my commitment.”

Shernaria and Wilkins are part of a seven-player team (Five boys and two girls) consisting of themselves, Jahmich Hutchinson, Nickello Pierre, Brendan Handfield, Omar Garland, and Bradley Louis. Overall the players were please with their performance and believe that they will be back next year. One player, Bradley Louis, commented that the experience was great and that it shows that the Caribbean has talented players that cannot be overlooked.

While in New York, Wilkins will get to practice at an NBA facility, participate in pick up games against local high school teams, tour the NBA office, watch a live NBA game, and much more. Team TCI will return to the Turks and Caicos on Thursday, Oct. 13th.