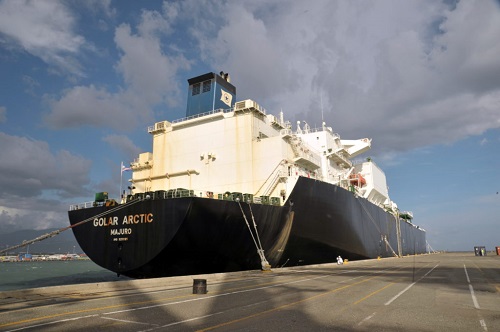 Montego Bay, Jamaica, October. 23, 2016 –  The Government’s drive to bring cheaper and cleaner energy to the people of Jamaica has been advanced with the arrival of Liquefied Natural Gas (LNG) for the Jamaica Public Service Company (JPS) power plant in Bogue, St. James.  Supplied by New Fortress Energy, the shipment arrived at the Port of Montego Bay aboard the feeder ship Anthony Veeder on October 22.

Chief Executive Officer (CEO) of JPS, Kelly Tomblin, said the introduction of LNG as part of the energy mix represents “a historic milestone for Jamaica” as the nation pursues “energy diversification and the expansion of its energy sector”.  Ms. Tomblin, who was at the Montego Bay port for the ship’s arrival, said New Fortress has pumped US$750 million into the construction of the LNG terminal.  She said that natural gas will play a key role in transforming the energy sector, while supporting industrial development and economic growth. “We are definitely on the threshold of great things for Jamaica and the region,” Ms. Tomblin added. 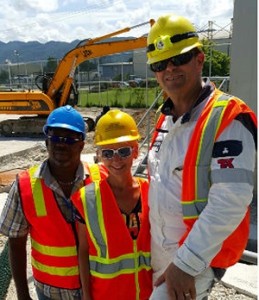 Meanwhile, Project Manager at the Port Authority of Jamaica, Keith Mitchell, said the agency is pleased to have done its part in facilitating the arrival of the vessel and to provide the infrastructure for the cargo to be unloaded.  “The LNG diversification project has resulted in the Authority fast-tracking its master plan for the development of the Port of Montego Bay into a modern facility with separate berths dedicated to cargo operations and cruise shipping,” he pointed out.

“We are also delighted to have been able to facilitate and enable the realisation of a national objective, which has been in the pipeline for a number of years.  This project is of national importance and is part of the Government’s drive to bring cheaper energy to the Jamaican people,” he added.

He informed that the Port Authority leased the lands to New Fortress for infrastructural works to enable the weekly arrival of LNG to be offloaded, converted and channelled for use at the Bogue Power Plant.   “This investment has the potential to significantly reduce energy costs and thus drive economic development and job creation and promote the wide industrial application of LNG,” Mr. Mitchell further explained.

“It will also see the facilitation of cruise and cargo vessels using LNG as well as the exportation of the product to other regional countries,” he added.  He noted that with the weekly docking of the LNG vessel coupled with the increased home-porting activities, there is need for the development of new port infrastructure, and a new dedicated cargo berth for docking containers and liquid bulk (fuels) vessels.  “There are indeed numerous opportunities for Jamaica to benefit,” Mr. Mitchell added.