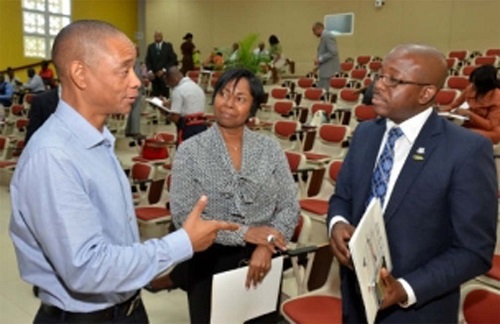 Kingston, Jamaica, October 24, 2016 –   Executive Director of the National Security Policy Coordination Unit (NSPCU) in the Cabinet Office, Jacinth Byles, has recommended increased use of technology to further safeguard Jamaica’s borders.  Among the inputs being proposed are biometric identification, aerial and land-based surveillance and detection, port and shoreline security, and cargo security.

She has contended that if law enforcement and other relevant State agencies collaborate on how these measures can be used to greater effect, “we can prevent new elements of crime from entering our waters.  I believe if we can stop the criminals from entering, we will be able to control the ones on land,” Mrs. Byles argued.  She was addressing the NSPCU’s fifth annual conference on border security, which was held at the National Police College of Jamaica (NPCJ), Twickenham Park, St. Catherine, on October 20 under the theme ‘Leveraging Technology for Effective Border Security’.

The conference also featured a presentation by Commanding Officer for the Jamaica Constabulary Force (JCF) Border Security Branch, Assistant Commissioner Assan Thompson, which detailed the correlation between security and technology.  His presentation focused on radar technology, closed-circuit television (CCTV), global positioning systems (GPS) as well as devices used to access information and the capabilities of these.

Mrs. Byles said the seminar was one of the Government’s initiatives targeting strengthening of Jamaica’s border security framework and was attended by representatives of several stakeholder agencies.  They include the Ministry of Health; Passport, Immigration and Citizenship Agency (PICA), Jamaica Customs Agency (JCA), Jamaica Defence Force (JDF) Coast Guard, and Jamaica Constabulary Force (JCF), Ministry of Health, among others.

Mrs. Byles said the participants were engaged in discussion on the theme, which enabled them to propose practical solutions on how best border security can be enhanced, based on their daily operations and engagements.

The conference also featured a panel discussion involving representatives of law enforcement and border security entities.  “As policymakers, the NSPCU is satisfied with the input and response from the stakeholders. We have started the discussions (which should take us) one step closer to protecting our people from human trafficking, guns, drugs, and even diseases,” she stated.

Several of the participants were also taken on a tour of Jamaica’s coastline between the Kingston Harbour and Rocky Point in Clarendon, which was facilitated by the JCF’s Marine Division.