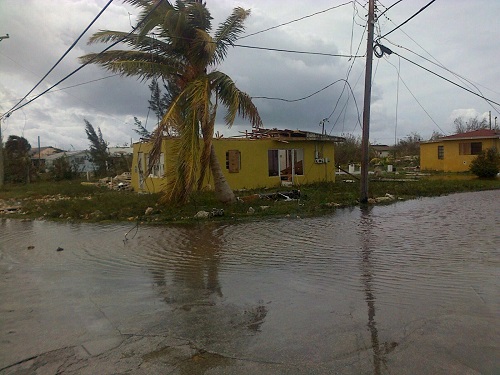 Grand Bahama, Bahamas, October 14, 2016 – Hurricane Matthew aggressively moved throughout Grand Bahama Island on Thursday, October 7th, 2016, with hurricane force winds in excess of 150 mph; damaging much of the residences and infrastructure on the southern shoreline, from East to West End. The storm brought Grand Bahama Island to a standstill, crippling business and commerce, with devastation impacting the daily lives of all residents. The level of damage is severe, and the impact to the livelihood of the people remains a serious challenge.

This department is providing accommodations for seventy one (71) displaced residents left in shelters, the majority of which are from the West Grand Bahama including the Pinder’s Point and Lewis yard area. Counseling services are in place for the residents.

Preliminary reports indicate that 525 social assessments were completed to date:

This work will continue, with added trained field workers from New Providence joining the Social Services teams in Grand Bahama.

Urban Renewal is also working within the communities offering assistance with food and humanitarian aid as the case may be.

The temporary clinic at West End was compromised as a result of flooding but has since been reopened in another location in West End.  The Eight Mile Rock Clinic will continue its regular operations, inclusive of extended clinic hours and will assume responsibility for services in the West End community as well.

The Department of Environmental Health Services has increased its surveillance in most vulnerable areas, and is providing updates to the Grand Bahama communities on a regular basis. Cleanup crews have been working within the various settlements to ensure that standing bodies of water is treated and garbage and disaster generated debris are collected and disposed of properly.

The Grand Bahama Utility Company has commenced restoring supply to its customers. 2 of the 6 major well fields have been brought back online and regular potable water supply has been connected to 80%+/- of the City of Freeport. Water supply in East Grand Bahama was uninterrupted throughout the Hurricane as the High Rock Well Fields stayed operational.

Limited potable water supply is currently being pumped to substations in West Grand Bahama, providing potable water to residents in Eight Mile Rock to West End. GBUC is currently working on repairing ruptured mains in the western end of the island to quickly restore full supply to the respective communities, and will continue to restore water supply, in a phased manner, over the next few days and weeks, as damaged infrastructure is repaired.

The Grand Bahama Power Company has moved with haste to replace fallen poles and repair transmission and distribution infrastructure, and as of Wednesday October 12th, 2016, power has been restored to some 4,000+ customers with increasingly more homes and businesses being reconnected to the power grid in the City of Freeport.

The company is currently being assisted by its international partners and accordingly, 200 additional support staff and 100 additional emergency repair vehicles to supplement its on-island workforce have arrived in Grand Bahama.

All of the schools on the island were damaged. Water has been     restored, electricity to follow. A detailed assessment is being done with cleanup and remedial restoration. A projected opening date of Wednesday October 19th, 2016, is realistic, albeit with limited services.

The airport is open for emergency and domestic flights only. The domestic terminal, as well as the international terminal/United States pre-clearance facility, experienced roof damages. Re-commissioning will follow the restoration of power and water; as well as the full operation of all navigational equipment. The Seaport is open for emergency cargo services only and other limited services.  The Freeport Container Port is experiencing some challenges and will, in time, return to normalcy.

Detailed technical inspections are ongoing at all government buildings by the Ministry of Works & Urban Development since they were all impacted in one way or another. Most services to the public are limited and will increase over the next several weeks as essential services are returned to normalcy.

The Royal Bahama Police Force has kept a firm hand on the anti-social habits of some since the storm. While many petty complaints were reported, law and order remains in place.

To date, many humanitarian gestures from businesses, individuals and service organizations have reached the various communities. The Bahamas Red Cross Society, Rotary Clubs and other service clubs as well as churches and civic groups, have moved throughout the communities with some supplies bringing much needed relief to many.

The need for sundry supplies is great. It is expected that the Government through NEMA provide the following in the short-term:

Minor house repairs would commence in the medium-term, with support given to residents requiring:

A tracking system will be put in place for all relief assistance offered.  Some major repairs should commence soon as well

Shelter for those who lost their residential homes would be given priority. Based on lessons learned from Hurricanes Francis and Jeanne in 2005/2005, immediate attention to secure land in or near West End where over twenty nine (29) homes were destroyed.

New construction techniques would be employed through the Ministry of Works & Urban Development for safe homes, which can be constructed in 60 days or less, at a cost not exceeding $50,000.00 (+/-) depending on various social needs.  Those receiving homes should be made to enter into a rent-to-own agreement with the Ministry of Housing and the Environment (Department of Housing).