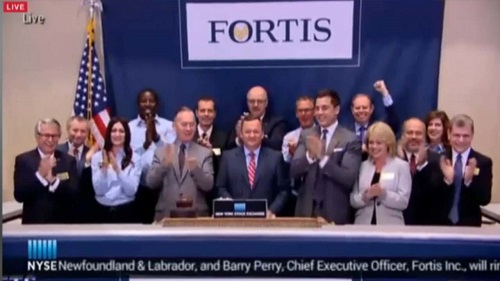 Providenciales, TCI, October 18, 2016 – FortisInc, the parent company of FortisTCI today joined the family of companies now listed on the New York Stock Exchange, and though the energy giant is a giant, the Turks and Caicos was not left out.  In fact,  FortisTCI’ s Manager of Plant Operations Alvejes Desir joined in the celebrations Friday morning in New York and he can be seen in the upper right hand corner of video we have posted at Magnetic Media Fanpage on Facebook and re-tweeted at MagneticMedia1 on Twitter.

Big bright smile from Desir, who is usually always flashing it and certainly it is warranted as FortsInc, established in 1885 in St. John’s, Canada did it big and with the honour of ringing the bell Friday morning (October 14, 2016) on Wall Street.  A CBC report said that the world’s biggest stock exchange also marked the occasion by decorating its exterior with Fortis trucks and posters, along with flying a Newfoundland and Labrador flag.

Fortis is reportedly the largest company to be listed at the NYSE so far this year.  FortisTCI here in Provo invited media and some of the business community to its Leeward Highway headquarters this morning to mark the milestone.