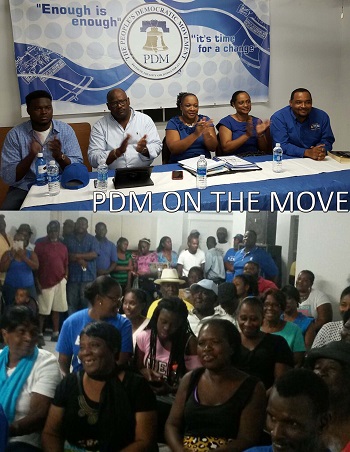 Providenciales, TCI, September 12, 2016 –  On Wednesday, August 10, 2016, the PDM introduced its Grand Turk constituency candidates at its Party Headquarters in Grand Turk.  Derek Rolle and Hon Edwin Astwood will carry the banner for the PDM in Electoral District 1 and Electoral District 2 respectively.  Their announcements were met with loud applause from a packed room of excited supporters.  Party Leader used the opportunity to energize the Party base and to assure them that the Nation’s Capital will be respected as the Nation’s Capital and hence the decision to present its candidates in Grand Turk.  Other Party officials and hopefuls were invited to greet those in attendance which included Hon Sean Astwood, Deputy Leader, Hons Derek Taylor, Delroy Williams, Goldray Ewing and Josephine Connolly,  All Island hopefuls Karen Malcolm and Robert Been jr, National Chairman and ED7 hopeful Douglas Parnell.

On Friday,  representatives of the PDM continued on to Middle and North Caicos and had a busy weekend on the Twin Isles with a Town Hall on Middle Caicos on Friday, August 12, 2016 and a Prayer Breakfast on Saturday morning, August 13, 2016.

Mr Ralph Higgs informed the members of his vision for these Islands and invited their questions, comments and suggestions.  Party Leader, Hon Robinson gave an account of her Party’s stewardship on issues affecting the people of Middle Caicos.   All members of the delegation greeted the attendees.   The delegation was cautioned not to disappoint the people as did the current Government and they enthusiastically shared ideas and concerns.

On Saturday, August 13, 2016, members of the PDM attended the Funeral Service for the Late Charles Glinton and witnessed the public announcement of the renaming of the Post Office after the Late Charles Glinton, former Post Man and long serving civil servant.  Party Leader who was in attendance stated that she fully supports this initiative.   Hon Derek Taylor was able to move a Tribute and the Leader only wishes to add that “Mr Glinton was the only real postman I knew having spent many Summers and midterm breaks here in Grand Turk.   His service and commitment were exemplary and he is worthy of this recognition.  I extend my sincerest condolences to his wife Esterleen, his children and wider family.   This renaming, I hope inspires civil servants to serve with distinction”.

The PDM intends to govern closely with its people as it continues to advance its plans that are “people centered”.

Related Items:PDM introduces it's Grand Turk constituency candidates, PDM on the move, renaming of post office in honor of the late Charles Glinton