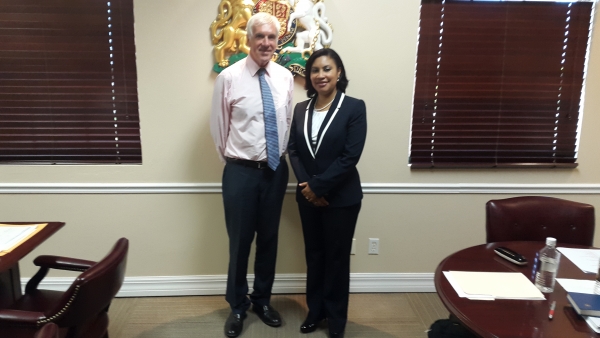 Providenciales, TCI. August 25, 2016 –  The Turks and Caicos Justice system, this month, gets two new defenders; a criminal justice adviser and a chief magistrate.

Directly we get Tanya Lobban-Jackson, originally of Jamaica but moving here from the Cayman Islands, where she was senior Crown Counsel, as the new magistrate.  Lobban-Jackson was sworn in last Thursday.

Hilary Ryan is the UK Foreign and Commonwealth Office’s newly appointed Criminal Justice Adviser to the Caribbean Overseas Territories. Ms Ryan, who will be based in Miami, will have a particular focus on child safe-guarding, serious crime and money laundering, and the criminal justice system.

Giving insight into a meeting held just a couple of days ago, His Excellency Peter Beckingham, the Governor said:  “I hope that Ms Ryan’s new role will encourage all the parts of TCI involved in criminal justice to look to the UK for advice and possibly financial assistance. We had very positive discussions with the Chief Justice, Police Commissioner, Acting DPP, Prison Superintendent as well as with the Chief Magistrate and Court Administrator about their work, and identified a number of areas where more support may be possible from the UK. Ms Ryan also highlighted the value in other jurisdictions of a Criminal Justice Board of senior practitioners, which could be a helpful mechanism as well in Turks and Caicos.” – HE Peter Beckingham.

Ms. Ryan also has great experience, said the Governor, in working with the US DOJ or Department of Justice.