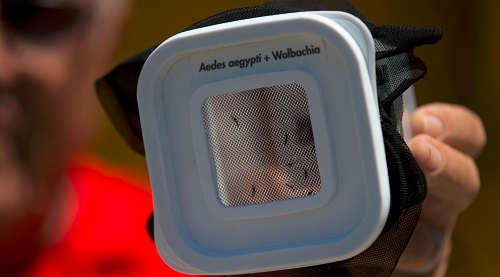 Providenciales, TCI, July 26, 2016 – The government is considering introducing genetically altered mosquitoes to help contain the population of the type of mosquito responsible for Dengue Fever, Chik-V and Zika.

On Saturday night, the nation was informed by media release from the Ministry of Health that we are now among the countries recording the Zika Virus. During House of Assembly session on Monday, the Premier identified the situation as alarming and called for calm and confirmed that the TCI is considering mutant mosquitoes to help contain the Aedes Egypti female mosquito.

Premier Rufus Ewing:  “…already engaged companies involved in the manufacture of genetically modified mosquito, and while all of the studies seems to be fine with it there is much resistance to this and actually this is subject to a judicial review in one of our overseas territories”, Hon. Dr. Ewing continued:  “If this goes well and good, this is something that we may have to consider using in the future and we will have to sensitize the public about it.”

Five residents, three cases contracted during travel to other countries account for the confirmed cases of the scary mosquito borne Zika Virus, which has the entire world on edge.  Health Minister, Premier Rufus Ewing said the other two confirmed reports are being investigated to find out how they came to be.

“It is still yet to be cleared as to whether there is significant travel linkage or whether or not there is any associated sexual transmission of those cases that can be linked to travel or individuals who would have traveled and had sexual contact.”

The Ministry of Health has still not explained why it was after five cases that the country learned that there is Zika virus here, nor have we been informed, as is commonly being done elsewhere, where the Zika is believed to have originated in the imported cases, nor do we know if there are any other suspected cases awaiting results.  What we did learn is that the individuals with suspected Zika were being monitored and that the cases did not just pop up on Saturday.

“I would like to say that yes, these five cases did not just pop up on Saturday.  A number of these cases are some that were once in time suspected and before we even communicate anything as it relates to suspected cases, we had to confirm, because we have to be true that we are confirming.  We had to also go further and find out in addition to whether or not they are imported cases versus in country transmission. So lots of work has been going on behind the scenes,” said Premier Rufus Ewing.